Number one for 17 consecutive months in the Korean eSports Player Association rankings. A salary pushing $400,000. The adoration of over a million diehard fans. All he needs now is his own line of gaming sneakers: Air BoxeRs. 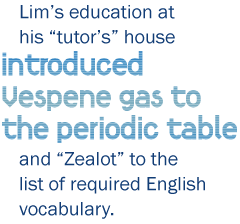 Lim Yo-Hwan, aka SlayerS_'BoxeR', is synonymous with StarCraft in South Korea. He arrived on the pro-gaming scene like a dropship from the fog, startling opponents and electrifying fans. And while his dominance has waned since his peak in the early 2000s, his contributions to both the game of StarCraft and eSports as a whole can still be felt even a decade later.

Lim's introduction to StarCraft came unbidden and unexpected. He spent most of his youth playing soccer at the expense of his grades, a trade-off he made willingly until low scores threatened his chances of getting into college. As afraid of failure as he was of his parents, Lim called on an old friend to help him as his study partner. Had it been any other summer, Lim might have salvaged his academic career and gone on to live an average life. Instead, his education at his "tutor's" house introduced Vespene gas to the periodic table and "Zealot" to the list of required English vocabulary.

Although his path into StarCraft was paved with pylons, Lim abruptly switched course when a patch made his bread-and-butter strategies nearly unusable. The Zerg star was still rising throughout the pro leagues, but never content to ride on coattails, Lim instead chose the Terran underdogs. Aside from the allure of forging ahead on a path rarely trodden by pro players, the basic humanity of the Terrans appealed to him. As he reasons in his autobiography, "Are not the humans the ultimate victors in [sci-fi] movies?" That decision, along with a tireless commitment to innovating and perfecting new strategies, proved enough to carry him into the annals of StarCraft history.

Lim entered the Terran Academy in the summer of 1997 and graduated cum laude as pro-gamer SlayerS_'BoxeR' in the fall of 1999. He spent the intervening years not only climbing the Battle.net ladder but also battling the social stigma of being the local "net café bum." Lacking the money to purchase his own computer, BoxeR practically lived in smoke-filled PC Baangs - Korean net cafes - for most of his amateur career. Unable to earn his parents' approval of his chosen vocation, BoxeR settled instead for their resignation. Many might consider this period the dark chapter of BoxeR's story, but he recalls it fondly. Free from the shackles of school and not yet burdened with the expectations of his fans, he savored the years he was simply able to do the one thing all gamers love: play.