Although both BoxeR and his fans have reaped amazing rewards over the course of his career, the entire industry of eSports benefitted most of all. Pro-gaming existed before BoxeR's first contact with StarCraft, but in a form wholly different from what it's evolved into today. Pro-gamers pre-BoxeR earned money solely from sponsors and tournaments, squeezing practice time in whenever they weren't preoccupied with arranging their own schedules and accommodations. In many ways they were like up-and-coming bands, tasked with honing their talent while shouldering all the responsibilities of a manager. Being able to game for a living may have been the Holy Grail they all strove for, but few actually managed to achieve that goal. 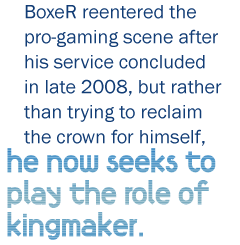 BoxeR was one of the first pro-gamers to command enough mainstream attention to justify a salaried contract and all the perks that came with it. He looked at his career as a series of goals, one of which was to clear the path for future gamers. That included justifying the vocation of pro-gaming as a viable career choice. Even today, there is still, in Korea and elsewhere, a stigma attached to those who game as anything more than a hobby. But by presenting the world of professional gaming as a genuine avenue of employment that requires discipline and a strong public persona, BoxeR dismantled unflattering stereotypes of gamers one victory at a time.

Once an unstoppable force, BoxeR now rarely qualifies for tournaments to which he is not invited. Although many lamented his abrupt departure from the pro-gaming stage when he was called into mandatory military service in 2006, BoxeR's manager could not have orchestrated a better exit. Questions of whether or not he had lost his touch by the time he left the pro-gaming scene were left unanswered, allowing his legacy to stand on its own in the public consciousness, free from the niggling doubts of a string of late-career defeats.

But BoxeR's influence did not simply vanish when he entered the armed forces. Because 27 months of service is required of all able Korean males, the government has special army leagues in place to enable professional players of "real" sports - soccer, baseball, etc. - to continue practicing while they serve. BoxeR played a key role in convincing the military to form an equivalent special air force team to play StarCraft in the Proleagues, helping to validate eSports in the eyes of the Korean government. That he only managed to lift his team from last to 11th place in a 12-team league is of little consequence next to the improbable reality of the team's existence at all.

BoxeR reentered the pro-gaming scene after his service concluded in late 2008, but rather than trying to reclaim the crown for himself, he now seeks to play the role of kingmaker. He already trained an equally dominant successor years ago in Choi Yeon-Sung, aka iloveoov, who shocked the pro-gaming world when he beat his friend and coach three to two in 2004. But whether or not the Terran Emperor grooms a new heir, BoxeR's legendary status is secured. Net café bum, Terran Emperor, team captain, gaming ambassador, military conscript, twilight hero and, throughout it all, diehard gamer, Lim Yo-Hwan is an inspiration to all players.

Brett Staebell once won a match of Defense of the Ancients in a Korean PC baang, but now wishes it had been StarCraft instead.