As I made my way through the campaign, I couldn't wait to be done with the Zerg. I longed for when I could wash my hands of their disgusting goo and their endlessly simpering voices. There's something about being bossed around by a psionic tumor that just doesn't sit right with me: "CEREBRATE! BLORB GLORB BLURBL SPAWN MORE OVERLORRRDS." 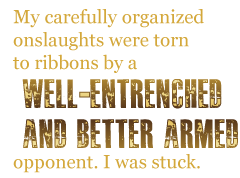 I'll spawn more Overlords when I feel like it. You're not my dad.

All that stood in my way was the final mission, called "Full Circle," to bring about the manifestation of the Overmind. The level has you spawn a final wave of your forces to tear down a Protoss high temple situated within the middle of a well-fortified city. But I just couldn't hack it. No matter what I tried, no matter how I marshalled my troops, I just couldn't pull it off. The Protoss were too secured and too coordinated to be so easily defeated. My carefully organized onslaughts were torn to ribbons by a well-entrenched and better armed opponent. I was stuck.

I halfheartedly picked at it over a couple of days, but the result was always the same: failure. One day, I fired up the level while my friend, an old RTS veteran, looked over my shoulder. Watching as I meticulously crafted my assault, organizing waves of acid-spitting Hydralisks and colossal Ultralisks, he sighed impatiently. As I struggled to plink away at layer after layer of the Protoss infrastructure, he became visibly agitated: "No ... you don't ... it's not like that."

In a moment of frustration, I stood up and let him take the reins, assuming that his strategies would fail just as completely as mine. Immediately, he began to lay down hatchery after hatchery and started to breed Zerglings - the smallest and quickest units that cost almost nothing to make.

He built more hatcheries and spawned more Zerglings - hordes of them. Then he did something I had never tried. Rather than send them to attack the Protoss defenses, he sent them to attack the temple itself and ignored everything else. They marched off in a thin line, like a procession of ants. Though the Protoss troops picked them off as they passed, splatting them left and right, there were so many of them that a few casualties were meaningless. The Zerglings swarmed the tower, massing around it, each bug merrily clawing away while the Protoss struggled to repulse them. Within minutes, the mission I had spent days attempting to beat was over, won effortlessly by the simplest unit on the field. Somehow that made the whole thing that much more humiliating.

I thanked my friend, weakly, for the help. After he left, I popped the disc out of the computer and tossed it in some dusty corner of the room. I was done.