Robert Heinlein, author of Starship Troopers and thus the leading authority on space bugs, once wrote, "A human being should be able to ... take orders, give orders, cooperate, act alone, solve equations, analyze a new problem, pitch manure, program a computer, cook a tasty meal, fight efficiently, die gallantly. Specialization is for insects." I've always taken this as a paean to adaptability and complexity. That's what I wanted in my troops - the ability to analyze, to cooperate, to compose an exact solution to every situation on the battlefield. It infuriated me that my elaborate strategies failed, and that a kamikaze wave of mindless grunts succeeded. As a tactic, it befit the Zerg perfectly - void of thought and bent toward a singular goal of dominance. I had been looking at the mission like a riddle or mathematical equation to be broken down into its elements and solved piece by piece. But some problems you solve with a hammer. 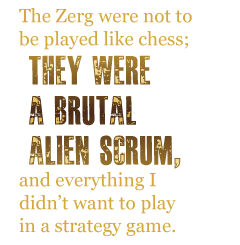 Beyond the embarrassment of my novice play, and beyond the realization that I had been playing the Zerg "wrong" up to that point, I saw the gulf between the StarCraft I wanted to play and the StarCraft that actually existed. Sometimes we get so caught up in how we think games should work that we become blind to the actual mechanics at hand. The Zerg were not to be played like chess; they were a brutal alien scrum, and everything I didn't want to play in a strategy game. I wanted to "fight efficiently and die gallantly." I guess I got my wish.

Years later, I've now replayed StarCraft many times, and I've realized that there was more to the game than I had originally thought. I didn't understand how close my personality was suited to the mechanistic and logical Protoss, who played in the exact style I was looking for. If I had just stuck around, I could have graduated from "Spawn more Overlords!" to "Construct additional pylons!" which I suppose is a step in the right direction. I've looked at FAQs and walkthroughs that have broken down several viable approaches to each faction, their numbers differing, their fundamental approaches varying based off situation and circumstance. It's easier, now, to see things not in black and white, but in varied gradations of strategy and tactics. The Zerg can be crafty, cunning and open to strategy - you just have to see them for what they are.

But I've never set aside the lesson that I learned that day. So now, when I go Zerg, I try to see the game through their eyes - their hideously undulating, multifaceted eyes. From that perspective, the Zerg stop seeming like rubbery castoffs from some Jim Henson backlot and start looking lean and lethal, ready to tear the universe a new asshole. When I go Zerg, I crawl into their insectoid minds fully and completely, watching wave upon wave of Zerglings rushing over the battlefield with satisfaction and a malicious joy.

Brendan Main hails from the frosty reaches of Canada, where the only big bugs are the blackflies. When not failing at StarCraft, he fails at all sorts of other things at kingandrook.com.