You've got to hand it to the Zerg: They've made their mark in videogame history. StarCraft's brood of ichor-dripping space bugs have come to serve as the hallmark of relentless aggression, to the point where a tactic bears their name. Today, the "Zerg Rush" is the quintessential videogame blitzkrieg: Hit early, hit hard and keep on coming until one side stops twitching. Their influence even extends beyond the boundaries of the real-time strategy (RTS) genre: A huge mob of players in an MMOG might zerg a boss or an enemy town, hitting it with waves and waves of cannon fodder until they eke out a bloody victory. Sometimes the term is used as an insult, suggesting a reliance on sheer brainless numbers over the subtleties of strategy and skill. But let's face it: Sheer brainless numbers do one hell of a number. Love 'em or hate 'em, the Zerg do what they do well. 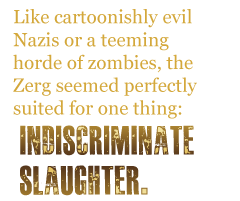 Back when StarCraft was released, however, the Zerg gave me a different sort of victory. I was new to the game and to RTS games in general, so my experience served as a lesson on the entire genre. The single-player campaign of StarCraft begins with the human forces, known collectively as the Terran, and so my first forays were couched in strictly human terms. As I progressed through the Terran campaign, I was drawn into the story of their struggles against the teeming multitudes of the monstrous Zerg and the distant, calculating Protoss. Sure, the Terran weren't perfect; but I figured for all their flaws, they were the best this Universe was going to get.

By the time I made my way through the Terran campaign, I was thoroughly disgusted by all the Zerg stood for. Like cartoonishly evil Nazis or a teeming horde of zombies, they seemed perfectly suited for one thing: indiscriminate slaughter. I imagined my role in the game like something from an old Raid commercial: "I kill bugs dead."

But StarCraft doesn't play out like that. Immediately after completing the Terran campaign, the player gains control over the Zerg hordes, taking the role of a newly spawned cerebrate in service to its omnipresent Overmind. Maybe it was the sudden jump from slaughtering the Zerg to marshalling them myself. Maybe it was the move away from the play conventions that eased me into the game. Whatever it was, it got under my skin.

I hated everything about the Zerg. I hated their schlocky B-movie dialogue as they chortled over their schemes to rule the galaxy. I hated the dripping pustules where they incubated that burst like a lanced blister as they emerged. Something about watching their pulsing insectoid hives reminded me of that old Night Gallery episode, where an earwig is dropped into a sleeping man's ear and starts burrowing into his brain. The good news is that the bug is ultimately extracted and crushed. The bad news is that "it was a female, that earwig. And a female ... lays ... eggs."