For all its claims to expansiveness, though, there are certain restrictions to Star Ocean's relationship roulette. Most notably, and in contrast to a large chunk of fanfiction, it's strictly a hetero affair. No amount of bromantic moments can spur your male characters past the realm of space-buds toward "the Love Which Has No Name But Several Websites That I Stumbled Upon While Writing This Article." Same deal for the lady-types. Second Story remains light years behind the narrative brilliance of Mass Effect's "alien lesbians in space" moment, no doubt to the chagrin of alien lesbian aficionados the world over. And then there are times when the game's devotion to a fanfiction sensibility comes across as a shade on the literal side. One of the best ways to foster sentiment between your party members is a skill-system called "publishing," where characters write stories and share them with their party members. So while fanfiction offers a "fictional" treatment of otherwise canonized properties, Second Story takes this one step further, proffering a fiction for fanfiction fans about fans of fiction. 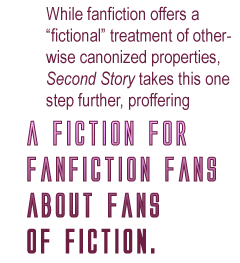 But while this relationship system pales in comparison to the sprawling matrices of player control found within some of this generation's RPGs, Second Story still serves as a benchmark in gaming's consideration of two major aspects of narrative. The first is simply a matter of scale: In its mix-and-match ending system, possible permutations of endings count well into the thousands. A rough estimate holds that the game requires six play-throughs to even see each short ending, which could be taken by a completionist as a worthy challenge or a lost cause, depending on their degree of masochism. This multiplicity of endings further places the game in the same line as the galaxies it inhabits: vast, unconquerable and maybe a little terrifying. And then there is the matter of canonicity: Removed from any linear notion of storyline and existing in a space where all relationships are equally viable, this drive towards fanfiction becomes legitimized, existing within, rather than outside of, a core work.

All these questions, from canon to the role of the author and viewer, are still being sorted out. But looking at Second Story's fanfiction sensibility does much to explain why things were so simple for Kirk and Spock. Often, it was just the two of them floating around out there, with all the time in the world to discuss their growing space-feelings. With all of Second Story's cast nursing secret crushes over the course of the game, you see how quickly things can get out of hand, moving well beyond the familiar territory of the tried and true "love triangle." This might very well serve as a title for a possible sequel - doesn't "Star Ocean: Love Dodecagon" have a certain ring to it?

Brendan Main hails from the frosty reaches of Canada, where he works on his Star Trek/Road to Avonlea crossover fanfic. He's thinking of calling it "Green Skin at Green Gables." He blogs at kingandrook.com.