Fanfiction is an easy target. Attacking it is akin to plopping the cast of Finding Nemo in a barrel from Donkey Kong and taking aim. In fact, there's probably a melodramatic 25-chapter crossover-fic with that exact plot being written right now. See? Easy target. 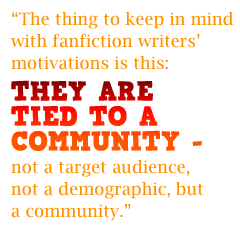 Articles like my own "Penning the Perfect Fanfiction" have taken a satirical swipe at some of the more ludicrous compositions - but could they be missing the point? According to two fanfiction writers and one "fan of fandom" from The Escapist's own forums, there's a depth and complexity to the community that the typical portrayal of fanfiction rarely reveals.

In many respects, the motivation for authors of fanfiction is the same as any other writer. Andrew (awmperry on The Escapist's forums), who writes primarily about Harry Potter and The Big Bang Theory, says that the "stories and plot bunnies piling up in my head" needed an outlet - a sensation that will be familiar to most authors. ("Plot bunnies" refer to stray story ideas that build up during one's appreciation of a work.)

However, fanfiction writers aren't driven to create a tale from scratch, but rather to tweak, alter and expand existing narratives, often stemming from a disappointment with how the series' original creator has handled his or her own plotlines - "adjusting things that I think should have been different in the canon," as Andrew puts it. In other cases - and especially with videogames - fans are driven to fill in the gaps of a series that is otherwise sparse on plot. Tiut, a fanfiction author since 2007, says he felt the Trauma Center storyline was too linear. "So I worked on giving it more substance."

This need to re-shape narrative could be interpreted as a bit fussy or an inability to accept the "canon" version of events. And if fanfiction were a purely individual pursuit, that might be true. But Dean (aka Ultrajoe), a convert to fanfiction who now regards it as a literary medium with an "unparalleled social component," suggests that the revisionist approach is more likely a result of its intended readership: others immersed in the fandom.

"When a fanfic'er writes, they are writing for others who know and enjoy the existing material," Dean says. "The thing to keep in mind with their motivations is this: It is tied to a community - not a target audience, not a demographic, but a community." He sees this desire for community involvement as a core component of fanfiction. "You're writing for an already receptive mind," he says. "The hypothetical writer of 'Diddy Kong In the Civil War' was never after literary accolades." Instead, Dean says, the writer was probably just looking for laughs or a nod from his or her friends. As far as he is concerned, fanfiction is written solely for the community that supports it. As for those who find fault with fanfiction, it wasn't intended for them in the first place.

Letters to the Editor: The Fanfiction Issue The Escapist Staff 0 Comments