Fanfiction: Get ready to see more of it. As ideas become more and more rare, the past is going to be ripped a new plot hole. Batman may have already brooded through a hundred lifetimes worth of experiences, but by God, he's going to do it again - and this time with a monkey. 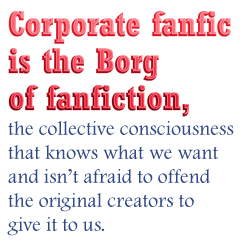 You've paid for fanfiction already, I guarantee it. Actually, what you've paid for is much worse. Fanfiction is a work of love/obsession by one fan for no other purpose than to proclaim his or her love/obsession. Corporate fanfic is the Borg of fanfiction, the collective consciousness that knows what we want and isn't afraid to offend the original creators to give it to us. After all, anyone can be assimilated for the right price.

In essence, corporate fanfic is what happens when a corporation ignores the original creator of a franchise in favor of what it believes will draw a greater audience. Although it doesn't always spell disaster, it often dilutes the character that made the original work so special. Whenever creative decisions are handled by people who have only a cursory knowledge of the source material, the quality and integrity of the work is bound to suffer.

As with regular fanfiction, the people most bothered by it are the fans themselves. Take the infamous scene in Spider-Man 3 where Mr. Parker suddenly becomes a swing dancing, lady punching emo about town. If that part of the script had been posted on someone's blog, the average fan would probably cringe uncontrollably upon reading it. But the average audience member watching it in theaters likely got a good chuckle out of it.

The brutal irony of corporate fanfic is that the fans are why these kinds of movies are made. The corporations responsible for the work know that by turning a well-loved property such as Spider-Man into a movie or game they have a built-in marketing team of thousands. When the first Spider-Man movie was announced, fans made sure that everyone on the internet was aware of it, and it only spread from there. Any creation with a significantly large following can be exploited in this way, which is incidentally why Universal Studios is currently in the process of making a movie about Monopoly.

But what happens when even the fans are against bringing their obsession to another medium? It's a rather rare event, which usually only occurs when the original creator is vehemently against the whole process. That was precisely the case with Watchmen.

Escape to the Movies: You Are Wrong About Spider-Man 3 MovieBob 204 Comments

Social Justice Warrior: Geeks Should Argue Politics. It's Good For Us. RossaLincoln 63 Comments