Watchmen and its writer, Alan Moore, are a perfect example of the rather one-sided relationship between the comics industry and the people who actually write the comics, a relationship that perpetuates corporate fanfic. Moore constantly asserted that Watchmen was meant to showcase the power of comic books as a respectable medium for telling deep and powerful stories. He also made sure readers knew that "there are things that we did with Watchmen that could only work in a comic, and were indeed designed to show off things that other media can't." Moore was so passionate about his work staying confined to its original medium that fans actually agreed with him. And of course, since fans were bound to trash any sort of adaptation, the 2009 film was bound for failure ... right? 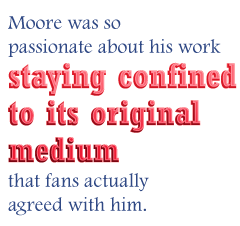 When the Watchmen movie was made - much to Moore's polite chagrin - fans knew it would suck. Moore stated emphatically that he wouldn't watch it, but critics claimed the director (Zack Snyder of 300 fame) would save the day. In the end, everyone walked away feeling secure in their judgments. Watchmen did well at the box office in the first week, then dropped off badly, becoming another "casualty" of a slowly rising fan/critic counterattack. Yet it was still the 31st highest-grossing film of 2009 - not a bad haul for a movie whose only "superhero" spends the bulk of his screen-time pantsless.

It must be said that the Watchmen movie, for the most part, isn't corporate fanfic. Snyder followed the original storyline like an edgy tightrope walker, hoping it wouldn't be the movie that would kill his career. In fact, the only real change he made is the one that really illuminates the subtle danger of corporate fanfic.

In case you don't know the story of Watchmen, here's an extremely quick (and spoiler-ific) synopsis: In an alternate version of world history, Nixon never lost the presidency and "caped crusaders" became a cold war craze. At the outset of the story, we learn that someone has begun killing off heroes. A few of the remaining vigilantes band together to investigate. Eventually, they discover the culprit was a former colleague, Ozymandias, who is intent on diffusing tensions between the U.S. and the U.S.S.R. by causing a huge catastrophe and blaming it on the most powerful of all the superheroes, Dr. Manhattan.

In the movie, the catastrophe is the detonation of a series of "energy reactors" that Ozymandias created with Manhattan's help under the pretense of supplying free energy to the entire world. Sound fairly reasonable, right? But in the original graphic novel, New York is destroyed by ... a giant, goofy looking, telepathic squid alien made by kidnapped Hollywood movie monster designers.

If you read the book, Moore's curveball ending actually makes some sense, as it was tied into one of the many parallel plot lines that run through the novel. Snyder could have included them, but they would have made a two-and-a-half-hour movie into a four-hour one. Snyder, an immense Watchmen fan himself, might have been fine with that, but what about the average moviegoer, i.e. the person corporate fanfic is tailored to? Lets go ahead and ask them what their response to a four-hour movie - any four-hour movie - would be:

"It was four hours long."

Escape to the Movies: You Are Wrong About Spider-Man 3 MovieBob 204 Comments