This highlights an immutable truth about cross-media works: Even if a director tries his hardest to stay true to the original creator's vision, there will inevitably be some loss in the transition. You really can't blame Snyder on this one - in fact, he may have been the victim of some extremely creative sabotage. 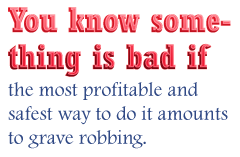 It's possible Moore included the squid alien as a safety measure against turning his work into corporate fanfic - ironic, since it seems at a glance to be the most absurd, half-baked and fanfiction-like part of the entire story. Because Watchmen was released in segments over time, Moore could watch his hardcore fan base form with each volume. But in case his fan base wasn't enough, he added a countermeasure: At the very climax of the story, he placed the most ridiculous, shocking and out-of-place thing he could think of. He knew the psychic squid would kill any chance of making an entirely accurate graphic-novel-to-movie transition.

The main thing to take out of this is that there is really no way to make an adaptation that isn't corporate fanfic unless you put the original creator in the director's seat. Because that isn't really feasible, and because that is often very undesirable for the company financing the endeavor, it rarely happens.

So is there any way to make good, clean, wholesome corporate fanfic that everyone can enjoy? Actually, yes. Two words: Dead Authors. The only tricky bit about this tactic is knowing how long to let the body cool before playing make believe with the creator's life's work. The most recent winner? Dante's Inferno.

Dante's Inferno is a rather fun God of War clone gameplay wise, but that's not the important bit. What's notable is that it stars a poet, Dante Alighieri, who slaughters hordes of hellspawn with weapons that can only be described as bitchin'. It's not exactly the most faithful interpretation of Dante's original poem, but I doubt he would mind. Any author who casts himself as the main character in his own novel would probably love to see himself portrayed as a totally badass demon killer. But then again, he also might have considered the whole Schwarzenegger-ization of his seminal work to be an inexcusable offense.

The point is, you know something is bad if the most profitable and safest way to do it amounts to grave robbing. Yet corporate fanfiction will continue to grow and thrive, from its beginnings in the comic book-turned-movie craze until studios finally run out of anything originally successful to squeeze a quick buck out of.

And we will pay for it. Oh yes, we certainly will.

Dillon Sinnott is watching carefully to make sure this article doesn't accidentally turn into a movie. Still watching ...