For some, fanfiction provides a fun distraction or catharsis for story events they felt had gone awry. For others, it fills the gaps that games don't have the time to cover, letting their imagination run wild. But what about providing wonderful practice for aspiring authors? Inspiration for original works? Would it surprise you that compelling characters can have their beginnings as OCs (original characters) in fanfiction? Fanfiction is more than just a misguided foray into fantasy - it can be a springboard into genuinely creative literature. 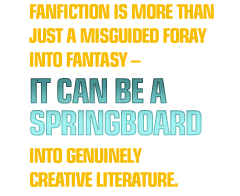 I began writing fanfiction as a teenager, enthralled by the B-horror of the Resident Evil series. After completing what at the time I considered an epic action tale of horror and intrigue (which these days would make slightly less sense than the story of Resident Evil 5 - and with far worse grammar), I moved onto Final Fantasy VIII. One 20-something chapter story later, I had a gang of OCs and an entire made up country. Even between these two stories, I found my style of writing changing, along with my characterization skills. Characters became more like actual people, and the twists in the story came from a more natural progression than simply "because I said so." The original characters stuck with me so long that creating an entirely new world felt like a natural progression. However, I would never have gotten to that point without my videogame fanfiction.

At the simplest level, I have fanfiction to thank for simply giving me a reason to continue writing - practice may not make you perfect, but at least it makes you better. A huge part of becoming a writer is simply sitting down and setting pen to paper on a regular basis, and you can't do that without a topic that keeps your interest. Odds are you'll pick up some of the technical skills of writing as you go, or may find some pointers in books by seasoned pros. (I recommend Stephen King's On Writing for a bare-bones approach to the craft.) Like any other vocation, it takes continued effort to keep those technical skills sharp, and if adding your own spin to a videogame story motivates you to write more, then it's a good thing.

But beyond providing a reason to keep writing, fanfiction offers a solid jumping-off point to improve your skills. Take "Mary Sues," for instance - a term for flawless, idealized characters whom the plot revolves around. Mary Sues - or Marty Stus, if the characters are male - become part of the "main gang" almost immediately, have unusual facial features or hair and some sort of special skill or power that will inevitably save the day. There are legions of them in fanfiction, and indeed, some of them make their way into original fiction as well. But writing fanfiction doesn't necessarily mean resigning yourself to creating the same flat, predictable characters over and over again. There's always a way to take the blueprint of what could be a Mary Sue and build an interesting three-dimensional character out of her.