Years later, I decided despite all that, there was something about the character worth writing about. I took that caustic gal and put her in her own fantasy world. When I did, I found that an ensemble cast was still what I wanted to work with. So I created other characters to populate this world - some of them laid back, some cheerful and some stoic. All of a sudden, the story wasn't all about this one girl, and she worked better as a foil for the main character. Without the time I took to get used to giving all the cast of Final Fantasy VIII a time to be themselves, this original ensemble cast would have felt a bit overwhelming. The project's still unfinished, but I've made huge strides, and the story wouldn't even exist without its Final Fantasy VIII roots. 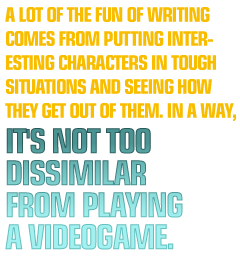 In fact, not only did Final Fantasy VIII allow me to create the character that started my original work, but it also gave me some basic story ideas. Just as you transplant characters from fanfiction to original fiction, so can you with story elements. It's simply a matter of figuring out the story's skeleton without all the game references and going from there. For instance, my Final Fantasy VIII story was a mystery involving a new sorceress and how it tied to one character's past. It expanded into a somewhat clichéd new sorceress war, but the basic ideas (with a few tweaks) were completely workable in its own world. For every situation you can think to put the videogame characters in, there's a way to insert your own characters. A lot of the fun of writing comes from putting interesting characters in tough situations and seeing how they get out of them. In a way, it's not too dissimilar from playing a videogame.

Fanfiction gets a lot of derision as the efforts of people with too much time on their hands. And let's face it: There's a ton of badly written and truly odd stories that people come up with. There are just some stories that you wouldn't want to touch with a 10-foot pole, and for some writers, no amount of practice will allow them to write better stories. However, the jokes and the air of geekiness shouldn't make people overlook some of the truly useful aspects of writing fanfiction. It's a fun way to practice the craft with some of your favorite characters, and with some talent, you don't have to keep your OCs in those already made worlds. Who knows what kind of tales of heroes and villains could spring from their fanfiction beginnings and capture the imaginations of their own group of fanfiction writers?

Vanessa Cohen likes to think of herself as an artistic jack-of-all-trades and aspiring voice actress. She spends a lot of time playing videogames and tabletop roleplaying games. Her website is www.vanessacohen.com, where you can see her art and links to her blog.