Life as a Neolithic farmer couldn't have been easy. For our early ancestors, clad in fetid animal skins and armed with little more than a horse's jawbone, existence would have been harsh and brutal; a grinding, unpredictable war against nature, the elements, predators and rival tribes, with no supermarket to provide instant food. It would take a few thousand years of selective breeding and cultivating before we could ride the first horse, milk the first cow, or grow the first crops of wheat. 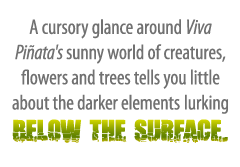 Since the industrial revolution took the majority of the human population from the field and into the factory, we have, as a society, gradually lost touch with nature. Our meat comes wrapped in cellophane, our vegetables pre-washed in plastic bags.

In the majority of games, nature is nothing more than verdant wallpaper, a leafy theme for the combat occurring in the foreground. We're perhaps dimly aware of the parakeets flying overhead as we blast away at khaki-clad goons in the first section of Far Cry, and we may pause occasionally to take note of the shoal of tropical fish swimming in the sea. But such creatures have no life of their own, and are not integral to the game.

For a species once steeped in agriculture, it's a little surprising that so few games accurately describe humanity's symbiotic - and often strange - relationship with the natural world; that one of the few titles to do so is a children's game full of multi-colored paper animals is more surprising still.

UK developer Rare, stealthily bought from Nintendo by Microsoft in 2002, was previously notable for the seminal console shooter Goldeneye 007 and the platforming antics of Banjo Kazooie. Their first game under the patronage of Microsoft, Viva Piñata, was intended to usher in a new era of family-friendly entertainment on the Xbox 360. Created in conjunction with 4Kids Entertainment television, it was intended to be a gardening simulation full of sunshine, seed planting and gentle animal nurturing.

A cursory glance around Viva Piñata's sunny world of creatures, flowers and trees tells you little about the darker elements lurking below the surface. Playing the game for the first time, I dismissed it as little more than a child's toy, a digital play house full of sweet graphics and flower arranging. But under the game's saccharine shell lurks a very adult center, for Viva Piñata's apparently innocent exterior is a thin veil for its hidden themes of sex, death and occasionally startling cruelty. The anthropomorphism of Sonic the Hedgehog, or the distracting, RPG-like human relationships of Harvest Moon is nowhere to be seen. In Viva Piñata, you can batter hedgehogs with shovels, and feed geese to crocodiles.