Nintendo Power announced Mega Man 10 to the world when they unveiled the cover for their 250th issue on December 9th, 2009. The announcement was a banner headline over a character collage that was ninety-nine percent Nintendo iconography, featuring nearly all of their most recognizable mascots from the 1980s with Sonic the Hedgehog snuck into the lower right hand corner. Within hours, the story had shown up on almost every gaming blog in every language on the planet, and gaming forum members were discussing the initial details of the game and enjoying the leaked parody cover art. Between December '09 and the game's March 2010 release, Mega Man 10 was previewed at press events, discussed by creator Keiji Inafune on Capcom's Unity blog, and advertised on Xbox Live. It received favorable reviews. Its well-publicized downloadable content went live earlier this month. Mega Man 10 is a good game from a franchise that is older than millions of game players.

It is not, however, a mystery. 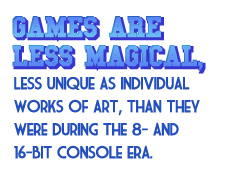 When the original Mega Man appeared in 1987, it was as if some bizarre artifact from another universe had slipped into our own. Its packaging is now legendary: a crude cover drawing of some poor bastard suffering from rickets packing a gun in a city where the laws of physical perspective have disintegrated into a pastel nightmare of palm trees and metallic boils. But it didn't exactly inform the experience of actually popping the game into an NES and pressing start.

When you did take that leap, you were shown a black screen with the title and then another with a ring of six robotic men. Selecting one led to strange cityscapes and industrial ruins backed by strangely melancholic bleeping melodies. The eponymous Mega Man was diminutive, his chief expression an exaggerated blink and a shocked O-face when he jumped.

There was no press push to promote the game before its release. The only "coverage" was a full-page ad in Nintendo Fun Club, the free newsletter that eventually transformed into Nintendo Power. The ad's oblique claim that Mega Man sported "1 million bits of responsive memory" might as well have been in hieroglyphics. The game's credits didn't even have the staff's full names, just their nicknames. It was a storybook from the future, a transmission from a fictional world. It was a mystery.

The difference between Mega Man and 10 exemplifies a broader phenomenon in gaming and the culture that surrounds the medium. There is a perception shared by players that somehow games have diminished over time. Games are less magical, less unique as individual works of art, than they were during the 8- and 16-bit console era.