As co-designer of Dungeons & Dragons (with Dave Arneson), co-owner of D&D publisher TSR, designer of Advanced Dungeons & Dragons and founder of Dragon magazine and Gen Con, E. Gary Gygax was the visionary archmage of fantasy roleplaying games. As roleplaying's public face, Gygax had guest-starred on Futurama, Sync magazine named him the #1 Nerd of All Time, and cyanobacteria strain UTCC393 had been christened Arthronema gygaxiana. Gygax, designer of the original 1978 killer dungeon, Tomb of Horrors, symbolized the grand old style, the incunabular era when fighters faced three cloud giants in a ten-by-ten room. His death in March 2008 prompted worldwide notice and, for generations of roleplayers, genuine grief. 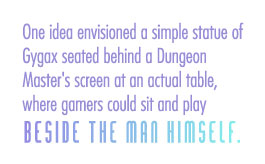 Fans marked the great gamer's passing in many ways, such as the touching D&D Online memorial service and the giant 20-sided die in MIT's Killian Court. From that first sad moment in March, with the news still cold in their hearts, some wondered about a memorial. "I thought for a second about suggesting a memorial dungeon, or a memorial adventure, or whatever, but the entire industry is his memorial," said Darren MacLennan, a moderator at RPG.net. "You could still do it, but it would just be another brick in the wall of the building that he built." An industry mailing list discussed how Gen Con might mark Gygax's passing; the consensus verdict was to say, "Look around."

No single observance or entity would have conveyed the significance of Gygax's gift. Fans of tabletop gaming's Old School Revival believe even modern roleplaying itself falls short. They honor Gygax by recapturing the bygone spirit of the late 1970s, when the world was new and Gary shaped the field month by month. In the event, though, Gen Con 2008 remembered its founder in several ways, including a moment of silence, a marathon "Tower of Gygax" dungeon crawl and a Grand Gygaxian Dice Collection, contained in a giant D20 and auctioned for charity. A small plaque commemorated "the first DM, [who] taught us to roll the dice."

Meanwhile, Gygax's family is preparing a physical memorial, a monument in his longtime home of Lake Geneva, Wisconsin. When news got out in 2009, exuberant fans on gaming forums offered many helpful suggestions:

- a bespectacled, bearded, slightly pudgy Gary holding aloft an enormous d20 on his back, like Atlas with the world -

- with a hand out, offering a set of polyhedral dice -

- a level 30 wizard, and his staff should have a white crystal that when it gets dark, a light inside glows. There should also be a tray in the shape of an open dicebag where we can leave offerings to the great one -

- a giant dragon, Gygax riding on his back, with a giant mace in one hand and a two-hander in the other, with a huge shield on his back, casting spells and bearing the Epic ruleset -

- ripping one of the beholder's eye tentacles out - WITH HIS TEETH! -

- big gems for eyes. But if you try and steal them, he animates and attacks you -

- on a plaque underneath it says "YOU'RE WELCOME, BLIZZARD!" -

- a small concealed hatch at the base with a dark hole behind it. Deep in the hole there should be a glued-down pile of coins and a guillotine trap -

- nearby we need a white gazebo.

One idea, most praised of them all, envisioned a simple statue of Gygax seated behind a Dungeon Master's screen at an actual table, where gamers could sit and play beside the man himself.

Don't get your hopes up, though. The memorial, whatever it is, seems destined to be - listen, now, to the shade of Gary sighing - tasteful.

Gallery of the Day: 8 of the Best D&D Modules of All Time ffronw 9 Comments
Comments on