The arrogant prosecutor, favoring convictions over the truth, is a mainstay of the PW series. Phoenix Wright's courtroom adversaries are far from sympathetic characters. Preening and haughty, the game's prosecutors radiate extreme arrogance and care for nothing but successful convictions and maintaining perfect winning streaks (sometimes engaging in underhanded tactics along the way). They are portrayed as powerful, high-status individuals who would never miss an opportunity to lord it over lowly defense attorneys. Even Miles Edgeworth, the redeemed prosecutor, continues to conform to this archetype. Despite ultimately coming to realize that the truth is more important than convictions, Edgeworth remains as proud and supercilious as ever. The prosecutors of Ace Attorney, virtually without exception, are portrayed as unscrupulous egomaniacs. 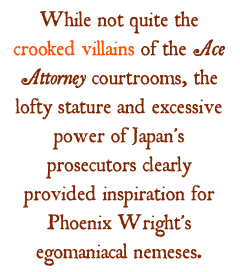 While the widespread underhanded behavior among prosecutors is a little exaggerated, the idea of the prosecutor as a very powerful individual with a high social status has roots in the history of the Japanese legal system. Traditionally, prosecutors were considered part of the judiciary and regarded themselves on the same level, or higher, than judges. Conversely, attorneys were considered far lower on the totem pole due their inferior level of legal education and their lack of influence in the bureaucracy. While post-war reforms have evened this out a bit, prosecutors retain a great deal of status and clout. The games reflect this, not just in the broad depiction of prosecutors as arrogant and powerful, but in how other characters perceive them. Edgeworth travels first class and drives expensive cars, while Nick rarely has two cents to rub together. Prosecutors are treated with awe and admiration, while Nick doesn't get much respect from anyone, including his own assistants.

Prosecutors exercise great control over all aspects of the criminal process. Their presence looms large from the crime scene to the courtroom. Unique to the Japanese system, prosecutors often directly oversee investigations. While the investigating officers technically have primary responsibility, in practice, prosecutors often take charge and issue orders to the police. In Ace Attorney Investigations: Miles Edgeworth, we get to see this in action as the prosecutor directs a series of investigations and bosses around the local police.

Once investigation is complete, a prosecutor has complete discretion on whether a case goes ahead to trial or not. As in the games, high conviction rates are highly prized as a sign of prudence and professionalism among prosecutors. Given their intimate involvement throughout the process, a prosecutor will usually be extremely confident when they decide to take a case to trial. While not quite the crooked villains of the Ace Attorney courtrooms, the lofty stature and excessive power of Japan's prosecutors clearly provided inspiration for Phoenix Wright's egomaniacal nemeses.

Contemporary attitudes to the Japanese police force are also evident throughout the series. The modern Japanese police officer is represented in the form of Detective Dick Gumshoe. Gumshoe is a nice guy who means well, and his heart is always in the right place. Unfortunately, he is also completely incompetent. Many of the other police in PW are similarly nice but dim. Maggie Byrd screws up everything she ever attempts and finds herself on trial for murder on four occasions, while the moronic Officer Meekins makes even Gumshoe seem professional. In the 2000s, public confidence in the Japanese police force dropped below 50 percent, a historic low that does not compare favorably with other industrialized jurisdictions. Since the late 90s, crime in Japan has surged by 150 percent and the public does not feel that the police are up to dealing with the complexities of modern crime. The game's unflattering portrayal of the police reflects the growing public discontent over their performance.