Finally, there is the prevalence of confessions. Ever notice how so many of Nick's clients have already confessed to crimes by the time he takes on their case? Known as "the king of evidence" by the Japanese system, confessions obtained in custody by prosecutors and police are the basis of the majority of convictions. Few rules govern what goes on in a Japanese interrogation room. Suspects are held for long periods before being charged or brought to trial, and the law offers them little protection. Critics argue that the system is open to abuse, and that false confessions are often extracted through coercion. While Ace Attorney avoids directly confronting the hot topic of forced confessions (Nick's clients usually have some convoluted reason for falsely confessing), it does reflect on how strangely commonplace they are in the Japanese system and the dangers of their centrality to convictions. 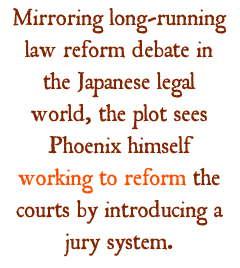 All-powerful prosecutors, incompetent police, and reliance on dubious confessions constitute the recipe for what lies at the heart of every good Ace Attorney case: a grievous miscarriage of justice! Forum 90, a Japanese anti-death penalty group, conducted a survey of 900 ex-judges. Over 80 percent believed, that under the current system, miscarriages of justice were inevitable. Take the case of Toshikazu Sugaya. He matched the profile and blood type of a child murderer, but the police lacked any evidence. "They barged in and told me to sit down," recalls Sugaya. "Then they kept saying, 'You killed that kid, didn't you?' I said 'No, no,' but they didn't believe me." After a 13 hour interrogation without food, water, or a lawyer, Sugaya confessed. Armed with this confession, the prosecution successfully convicted him and he was sentenced to life in prison. It would be nearly 18 years before modern DNA evidence would completely exonerate him. Faced with an unfair system inflicting cruel injustice on helpless innocents, it's no coincidence that someone in Japan dreamed up Phoenix Wright, the heroic defense attorney. No matter the odds, no matter how certain defeat, Nick never gives up and remains unwavering in his belief in his client's innocence!

Despite being so critical of Japanese criminal justice, Ace Attorney leaves us with reason to be hopeful about the future. The redemption story of Miles Edgeworth shows that the creators believe that the system has the capacity to change. Even more significant is the main storyline in Apollo Justice: Ace Attorney. Mirroring long-running law reform debate in the Japanese legal world, the plot sees Phoenix himself working to reform the courts by introducing a jury system. In 2009, Japan held its first jury trials since 1942. From now on, the fate of defendants in major criminal trials will be decided by 3 professional judges and 6 lay-judges. Decisions will be by mixed majority (the majority vote must include at least one professional and one lay judge) and it is hoped these lay-judges will bring fresh perspectives and won't be so entrenched in the status quo.

The cases of Phoenix Wright always end up being more complex than they first appear, and the same could be said of the games themselves. Beneath the outrageous courtroom battles and zany characters lies a sly critique of Japanese justice. So the next time that you're frustrated by certain defeat or feel like the deck is stacked against you, take heart! This is just another day in the life of a Japanese defense attorney.

A three year resident of Japan, Fintan Monaghan currently works at a human rights NGO. His freelance work has been published on a wide variety of Japan-related subjects.