The hourly rate and shared terminals helped destroy the sense of linearity that often accompanies Western games. It would be unlikely that I'd hammer through twenty hours of a single player game by normal means, so the sessions became more about the immediate experience. When I booted up GTA III, god-mode was automatically turned on and there was an option to skip to any mission in the game. Any limit of authorial intention had been removed by the "convenience" of the venue in which the game was being played. 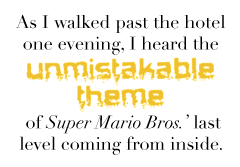 Lacking an economy that can support the sale of expensive technology focused solely on entertainment, the language of games in China favors cyclic rather than linear play. Presented in this way, the big event games that dominate the Western market fall eerily flat. Stripped of its plot and cinematic allure, GTA III seemed dull and histrionic, lots of repetition without any systemic advancement.

A few years later I was living in Madagascar, another environment inhospitable to my Western craving for videogames. In Madagascar, even internet cafes were expensive luxuries reserved for city-dwellers and tourists. Console games were an alien creation, available only at a handful of French department stores, where overstocked Dreamcast and Nintendo 64 paraphernalia was sent from Europe to die. Even in this harsh climate, video gaming was ascendant. In the narrow cobblestone corridors of the capital, Antananarivo, I discovered a cramped shop that sold pirated Xbox and PlayStation games.

Local school kids would crowd into the store, rent an Xbox for an hour, and play Pro Evolution Soccer against one another for the equivalent of a dollar. Whenever I'd go in to rent a machine, a local boy would ask if he could play against me just as I'd sit down. The boys never seemed to have money of their own, and they'd wait hungrily for someone who did.

In the far-flung regional capital of Toliara, in the arid southern part of the island country, I discovered a small shack made of corrugated tin where lanky young boys would gather in the undulant mid-day heat. They'd take turns playing Tekken against one another on an old PS1 that an Indian merchant rented to them for a dollar an hour. There was no electricity in the little shack, everything ran on a power strip that siphoned electricity from a grimy old truck battery.

Schoolboys mixed with the sinewy Tandroy boys who'd come to the city to pull "pospos," a rickshaw that would help them earn enough money to buy a herd of zebu with which to start a family. In Tandroy, it was culture to fight against one another in a standing variant of wrestling called "Ringa." There was an unexpected mirror of this proud tradition in the grappling surrealism of Tekken. They laughed at the sight of a panda bear tackling a bald old man in an echo of a gesture that they knew innately.

In my own small village of Betioky, where I worked as a health educator, videogames had found their way into the most surprising places. One family owned a small hotel that catered to travelers on the one dusty highway that passed through town. It was a dingy cluster of three cement buildings, with sagging foam mattresses and one communal toilet.

As I walked past the hotel one evening, I heard the unmistakable theme of Super Mario Bros.' last level coming from inside. I looked in the door of the reception area and saw two young boys sitting in front of a small television, guiding Mario over the lava pits at the end of his journey. They were playing on a knock-off console from China that came prepackaged with ROMs of old Atari 2600 and NES games.