Dragon Age: Origins both was and wasn't my kind of game. The RPG parts of it were great - BioWare doing what it does best - but the micromanagement needed in the battles left me feeling cold. I didn't really enjoy the tactical fights, but I put up with it because I was enjoying everything else so much.

All that changed with the demon.

A little before the halfway point of the game, I fought a powerful shape-changing Sloth Demon that stalked the dreams of Circle Tower mages. His first couple of forms were no problem; some shape-changing of my own made short work of them. But once he hit his abomination form, my fate was sealed. I tried dozens of different tactics, but nothing seemed to work, and it wasn't long before the fight stopped being a fun challenge and became a chore. I couldn't retreat and reloading my last save would have cost me hours of work, so I did the unthinkable: I turned the difficulty slider down to easy. The demon fell very quickly after that, unable to stand up to the newfound potency of my attacks. The lower difficulty made much of what I didn't like about the combat disappear and I found myself wondering why I'd been playing it on medium for such a long time.

It was an interesting question and not one that I'd answer for a while. My problems with Dragon Age weren't because of a lack of skill on my part, but because I had skipped a lot of the side quests and thus a lot of the experience points. I could have gone back and leveled up my party, but honestly, I didn't want to.

I'd never played games on easy before because I'd never really had the need, and so the idea of simply making the game easier didn't occur to me at first. When I finally did think of it, I didn't do it immediately. Thanks to a mix of pride and stubbornness, I tried to kill the demon several more times before I finally admitted defeat. 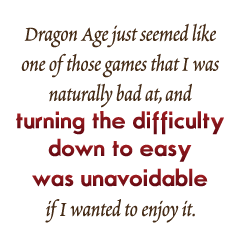 Once I had, however, I blasted through the rest of the game, and enjoyed myself a lot more than I would have otherwise. After a while, Dragon Age just seemed like one of those games that I was naturally bad at, and turning the difficulty down to easy was unavoidable if I wanted to enjoy it. My pride in my gaming skills had taken a bit of a knock, admittedly, but it wasn't really a big deal, and certainly wasn't something I was going to make a habit.

But then I started to play Mass Effect 2, and it become clear that there was more to my "situation" than simply finding DA:O tricky.

Mass Effect 2 seemed almost like two different games to me. The plot was interesting and the characters much more colorful than in the first installment, but, any time there was something to shoot, my interest began to wane. Tracking down the elusive vigilante, Archangel, on the lawless Omega station, or defending a certain Quarian crew member against a court of admirals was a lot of fun, but fighting waves of mercenaries or Geth? That was a different matter altogether.