My newly discovered self-awareness has a downside though. When I'm soured on a game that has good gameplay, but a lackluster story, it's frustrating because I know exactly what's happening. When BioShock 2 came out, the premise piqued my curiosity, but the storytelling just didn't seem up to scratch. It wasn't bad per se, it just wasn't as good as the original, which is hardly a crime. While I still wanted to find out what happened in the end, I wasn't deeply involved in the story by any means.

The problem is that BioShock 2 has the type of gameplay that I would normally appreciate. It has a great deal of intricacy and depth, and is a lot more immediate and visceral than Dragon Age or Mass Effect 2. But I just couldn't enjoy it. I'm not the type of gamer that can have fun with the gameplay in isolation, not in a single player game at least. Just like with the BioWare games, there's nothing really wrong with BioShock 2, but all I did was rush through the admittedly fun gameplay as quickly as possible to see how the comparatively weak story ended.

If a task wasn't connected to the main story, I didn't do it. I stopped looking for audio diaries or ammo and gave up on tactics, attacking with wild abandon, smashing things with my drill arm when I ran out of bullets. I didn't even really try to get ADAM, and I just "rescued" the Little Sisters the second that I killed the Big Daddies protecting them.

I finished the game, got the "good" ending, and moved on. It's unlikely that I'll ever go back to BioShock 2, because the story didn't grip me enough to want to play through it again. I've had fun with the multiplayer mode, but the single player is like a closed book to me now. The worst part is: I know that that has nothing to do with the game. 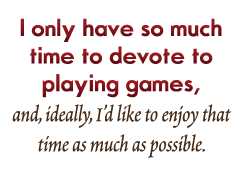 There's a reason that I choose to spend my time playing games rather than watching movies or reading books. With games, I can be an active part of the story, even if my role is just to "shoot the bad guys." I only have so much time to devote to playing games, and, ideally, I'd like to enjoy that time as much as possible. If that means playing games on easy, then that's exactly what I'm going to do.

Logan Westbrook could totally do a 200 Hit Combo if he wanted to ...