I know that I played Final Fantasy VI with my husband in the first year of our marriage, but, honestly, I don't remember it at all. I really only remember my husband nudging me awake and saying "It's your turn," as I slouched against either his warm shoulder or lay crumpled against the arm of the couch. It is an overstatement to say that I played Final Fantasy VI at all. I did occasionally rouse myself long enough to choose the actions of the characters I was ostensibly controlling in combat, but I couldn't tell you a thing about the story. That isn't completely true; I remember something about an opera house. My poor English-second-language husband struggled to remember the lyrics that he was tasked with putting in order, and I remember laying in a state of half-consciousness hearing the line "Oh my hero ... " again and again. 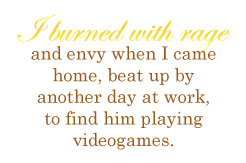 Maybe I should have gone to bed, but, at that point, Final Fantasy VI was probably the most important thing in my life. It was holding my life together.

Fairy tales, movies and TV shows fixate on the magical moment of marriage, or the struggle to come of age and finally transform into an adult. Falling in love online and struggling against all odds to come together is actually pretty easy and so romantic that everyone wants to help with advice, support, and an opinion about planning the wedding. I've been there. I met my husband in probably the geekiest way possible, playing on a text based Dungeons & Dragons themed MUD (multi-user dungeon). If you are too young to know what a MUD is: think World of Warcraft with no graphics. Our romance had all the classic fare of a good movie: distance, suffering, lost paper work, a canceled wedding. There were many obstacles to overcome but our perseverance led to what in a movie would be a happy ending. The thing is nobody talks much about what comes next: How you cope with the realities of marrying someone you met over the internet. What came next, for me, was being tired, overwhelmed, and broke.

What I remember about my first year as a young, professional and married woman is being exhausted. My body was tired, my heart was tired, and my mind was dazed with fatigue. If I had given myself time to think in the morning, I'm not sure I would have made it out of bed. As it was though, the alarm went off only half an hour before I had to be at work. It was just enough time to throw on clothes and stumble out the door. Trying to look like you know what you are doing is far more work than actually doing something. At my job, I was inexperienced and unclear about my duties. I chanted to myself, "Fake it until you make it," as I practiced a look of thoughtfulness while staring at my computer monitor.

When my husband said that he wanted to buy a used PlayStation 2, I had to swallow my instant reaction of, "We can't afford it." How could I deny him? He had given up his career, his country and his family to marry me, and now he was living in limbo; while he waited for his work visa and green card papers to process, his entire world was our 800sqft, one bedroom apartment. I also realized that it wasn't my money anymore. It was our money now. Despite all of these rationalizations and good intentions, I still burned with rage and envy when I came home, beat up by another day at work, to find him playing videogames.