"Obsessive-Compulsive Disorder, OCD, is an anxiety disorder and is characterized by recurrent, unwanted thoughts (obsessions) and/or repetitive behaviors (compulsions). Repetitive behaviors such as handwashing, counting, checking, or cleaning are often performed with the hope of preventing obsessive thoughts or making them go away. Performing these so-called 'rituals,' however, provides only temporary relief, and not performing them markedly increases anxiety."

-The National Intitute of Mental Health

Only a few people know that I suffer from obsessive-compulsive disorder. I tried to come out of the closet to my Mom a few weeks ago, but things didn't go as expected. She laughed at me. I couldn't possibly have OCD. After all, I never had a clean bedroom growing up and I didn't act anything like Jack Nicholson's character in As Good As It Gets.

Growing up, I pretty much resembled a regular kid. I loved action movies, I liked sports, I played piano and the guitar, and I was into videogames. But calling me highstrung would have been putting it lightly. I was socially awkward and terrified by all forms of attention, and it didn't feel "normal." I couldn't understand why I always felt so out of place. The feeling was just there. 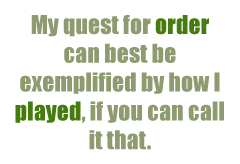 I instinctively suppressed all signs of weakness and vulnerability. Why? I don't know. Perhaps my steady consumption of Arnold Schwarzenegger movies warped my idea of what it meant to be male. I was so good at numbing myself that I didn't cry after learning that my grandmother had died. But, as hard as I tried to ignore my feelings, some symptoms of my strife did appear, like chronic stomach pain that couldn't be diagnosed by doctors.

Looking back, I can see that I began engaging in compulsive behaviors before kindergarten. The best explanation that I can come up with is that I needed relief and distraction from concerns about my family and occasional feelings of social isolation. Repetitive behaviors help you fool yourself into thinking that the world has some order to it, but they ultimately end up causing more anxiety when you realize that you can't stop.

My quest for order can best be exemplified by how I played, if you can call it that. I would build the same things out of LEGOs, Construx, or wood blocks over and over and over again, with no interest in creating anything remotely new or different. I enjoyed building things because I could control how everything unfolded, unlike in organized soccer and baseball games, where I had a tendency to freeze up at crunch time.

I could concentrate intensely for hours on perfecting the construction of helicopters or buildings, not making a sound the entire time. Colors had to match, symmetry had to be perfect, and, above all, proportions had to be realistic. I quickly learned to tune out those who did not understand my basic rules of construction management.

Surprisingly enough, my videogame-playing habits were another story. I was a pretty happy and loose gamer as a kid. I owned most of the major systems from the Atari 2600 on up, and played a wide variety of games, mainly sticking with big-name action/adventure, sports, and RPG titles. I leaned on the serious side in terms of play time, but was not obsessive. Having a blast playing sports games with my brother is the memory that stands out the most for me. Sure, I took the occasional well-deserved beating for my unorthdox (or as he referred to it: "cheap") playing-style, but it was all in good fun.