In a strategic game, a plan succeeds or fails by the variables involved. You observe the situation, predict the other variables, and then plan how to succeed. The game only stays interesting if the same plan doesn't always work. In chess, there is a human opponent that tries a different strategy himself for each game. WoW has numerous bosses with varied attacks and patterns. If the same decision works against each one, it gets boring. Figuring out how to maximize your damage against a target dummy is not interesting; determining how much damage you must sacrifice in order to survive a particular fight is.

And that's where complexity interferes. Complex systems emphasize process; simple systems emphasize choice. It's easy to set yourself up in a simple system. Want HP? Damage? Spellpower? Take your pick. Then you're hit with the tough decisions, tradeoffs between offense and defense, healing others or saving yourself. Did you make a few bad decisions? Then try a few others. Change your strategy and test it; repeat until you find something that works. Have fun. 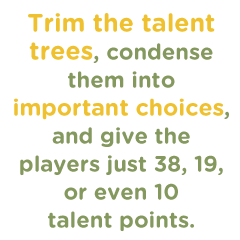 Strategic flexibility doesn't come from equipment, though. Gear is a long-term investment. After the first few pieces, you're lucky to upgrade it once per week. Most gear provides gradual upgrades, instead of making you rethink your strategy. Exceptions, such as trinkets that increase your offense if you sustain a chain of attacks, are few and far between. It's hard to change and it barely influences your tactics. In short, it's boring. We need some aspect of the game that can be quickly changed to match different strategies. Luckily, Blizzard already has one.

Talent points and builds differentiate your hero from every other hero. With a little knowledge and some gold, you can make your character play completely different in minutes. That still didn't provide enough flexibility and choice, though. Blizzard took a step in the right direction when they implemented dual-specs: being able to switch to a second character build between battles. Now in Cataclysm, the designers want to use talent points for tougher choices than +5% critical strike chance. Good for them, I say. Too many talent points were tied up in no-brainer decisions, like minor boosts in armor or spellpower. Few of them unlocked new skills or really changed how you played; they just reinforced what you would already do.

This is where Blizzard's initial design comes back to haunt WoW. Originally, talent points were given every level. With Cataclysm, endgame characters will have 76 talent points to spend. That's enough points to fill an entire talent tree and then some. Devoting each of those points to something important is an insane amount of work to balance. So why not reduce them? Trim the talent trees, condense them into important choices, and give the players just 38, 19, or even 10 talent points. It'd be easier for the developers to make new, exciting talents, then set them so that players have to make tougher choices than just "which tree should I put most of my points in?"