But even with just a few talents, they couldn't be perfectly balanced against each other. Eventually, a gamer scientist would crunch the numbers and declare that the Hunter's Marksmanship tree regularly causes the most damage against a training dummy. And everyone would suggest switching to Marksmanship, because it works best against the training dummy and probably the actual bosses as well, who are much less likely to let you analyze their stats before they eat you. If you can't balance everything out perfectly and don't reveal all the details on your bosses, how do you keep some variety among the endgame players?

Dungeons & Dragons 4th Edition had a similar problem to solve. The mechanics were changed from previous editions to give each class abilities that were similar in power, but diverse in effects. As individual powergaming became moot, a new form of optimization arose: group synergy. People realized that many powers set up opportunities for other players. The fighter could push a goblin into the other enemies, setting up an opportunity for the wizard to unleash an area attack. A warlord's command power could shift the rogue into a flanking position so that he could backstab. Players quickly began identifying each other's powers and then picking their own powers to complement them. The same could happen in WoW. 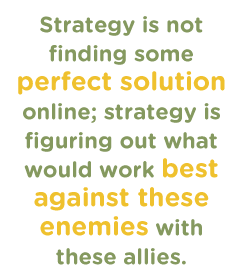 The one variable that a strategy guide can't predict is your personal group composition. With 10 classes, each of whom can choose between 3 talent specializations, there are more potential combinations for a 10-man raid than there are current WoW subscribers. What if your talent spec not only affected yourself, but everyone in the raid as well? The framework is already laid down. Certain talent bonuses, like the druid's moonkin form which bestows a +5% critical strike chance, are shared amongst the entire raid. Others have marking abilities, like warriors' Vigilance, that apply a bonus to one ally and a buff to themselves when it activates. Right now, some talent specs are better at this than others; priests who have spent most of their talent points in the Discipline tree, for example, have abilities like Power Infusion and Pain Suppression. The effectiveness of these powers depends on your raid makeup and whom you choose for the buff. There should be more abilities like these spread across the classes and specs. Doing so would encourage the same group strategizing that boss patterns do. Since their usefulness depends on the raid's makeup, each player has to think for themselves.

That is the kind of strategic depth that I want in a game. Vague attributes hinder casual analysis, driving players to read online FAQs for the optimal build. That isn't strategy. Strategy is looking over a boss's attacks and suggesting different positioning, or discussing which builds would complement your buddies. Strategy is not finding some perfect solution online; strategy is figuring out what would work best against these enemies with these allies. Simple mechanics emphasizes the external, not the internal. It emphasizes why we play the game. We do not play WoW to solve algebra problems.