It's hard to forget the first time that you managed to jump past Bowser and make your way to safety in Super Mario Bros. Watching as the bridge crumbled and Bowser plummeted into the lava below was a deeply satisfying experience. Some of gaming's most memorable moments are the result of a finely tuned confrontation with a hulking brute of a boss.

The boss battle has been around nearly as long as games themselves. The first game to feature a boss was Phoenix, an arcade shmup released in 1980. After completing four stages of top-down, space shooting action, you were pitted against an alien mother ship piloted by a diminutive space creature. To get to the pilot, you first had to weaken the ship's hull, getting through a layer of armor and avoiding a barrage of missiles. 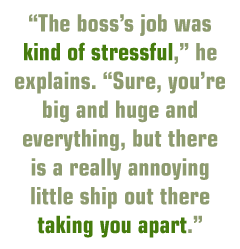 Since that auspicious debut, boss battles have gone on to serve a number of different functions and have expanded to appear in nearly every genre. What is it about bosses that have made them such an enduring feature? Why, exactly, do games need them?

"I think that the reason they're such a consistent feature in so many games, across so many genres, is that they serve as a sort of emotional milestone for the player," says Chris Cornell, of indie studio Paper Dino. "They're kind of a punctuation in the intensity of the play experience. It's good to mix up the pace and have moments where shit gets real, you know? Players love that stuff, and it generally makes things more interesting.

"The whole game of Left 4 Dead is arguably built around this idea, in fact, dynamically monitoring the game intensity and throwing out interesting hard parts when it thinks things are getting too slow. Imagine playing L4DM if there were no special infected, no tanks, no 'alert the horde' events, and normal infected came in a constant, steady stream instead of in waves. For the whole level. To me, that's what a game without bosses would feel like. It would still be a game, maybe even a fun one, but the bosses and unique events are what break it up and add the parts that people really remember the most."

Paper Dino recently released its first game, Boss Rush, and it takes an interesting look at the role of a boss battle. Like Phoenix, Boss Rush is a top-down, arcade style space shooter that features gigantic boss ships. The twist is that you get to take control of those ships.

"It was a pretty clear-cut case of bullet-envy," Cornell says, explaining the inspiration for the role reversal in Boss Rush. "I wanted the boss's job, and let some other poor shlub deal with dodging."

Designing a game from the perspective of the boss also gave Cornell some key insights into their importance. "I started realizing that the boss's job was kind of stressful," he explains. "Sure, you're big and huge and everything, but that still doesn't stop the fact that there is a really annoying little ship out there taking you apart, and frequently dodging even your craziest attacks."