Let's cut through the crap, shall we? The terms "casual" and "hardcore" are codes. They're words we use in the public sphere to refer to something that we do not want to say directly. Sometimes, that code is easy to read. "Family values" means Christian fundamentalism, for example. "Pro-choice" isn't free will, but is instead support for the legality of abortion. "Socially conscious" hip hop means that the lyrics complain about the music industry. For gamers, terms like "hardcore" and "casual" are a code with clear meanings. So let's be real, and call a spade a spade: "Hardcore" means dick. 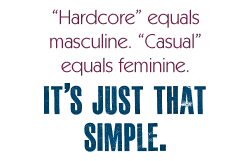 Or rod. Or johnson. Or, for the critical analysis fans out there, the phallus. "Hardcore" equals masculine. "Casual" equals feminine. It's just that simple, and all the marketing-speak about "core" gamers won't change that.

Consider how the terms are used. A game like Bejeweled is casual, and the usual reason given for this is that it's a simple browser game. Fair enough. But what about The Sims? While it may be considered a core game, since it cost full price in 2000 and used the latest technology, I think most gamers and game marketers understand that Sims players are so-called casual gamers, no matter how much time or money they invest in the game. That's because The Sims appeals to women as well as men. Ditto FarmVille obsessives who set their alarms for 3:30 am to harvest their crops. That's hardcore, but who's going to say so? (Game Industry veteran Greg Costikyan says exactly that, in his article "A New Audience," in this issue of The Escapist. - Ed.) Likewise, Nintendo's systems are disdained by "real" or "hardcore" gamers as being too "kiddie" (or casual) with their brightly colored graphics and games aimed at wider demographics. Girls might like that kind of game, and they have cooties!

Boys, of course, like real games. And "real games" are based on the toys that boys play with: cars, guns, and balls. Racing games, shooters, and sports games. Need For Speed, Gears of War, and Madden. In addition to their masculine subject matter, games in these genres are almost always multiplayer, allowing for opponents to be crushed and driven before the player, and (theoretically) for the lamentation of their women to be heard.

A game like Plants vs. Zombies is a near-perfect case study. Being a PopCap game, it's easy to label it as casual, but is it really? The interface is relatively simple, yes, but the gameplay is that of a real-time strategy game, and the subject matter is the slaughter of hordes of zombies. What makes this casual compared to, say, WarCraft III which is also a real-time strategy game which involves the destruction of undead hordes? It's not the content, it's the cover.

Social psychology studies have found that children recognize what toys and games go with the "proper" gender based on the form of the toy more than the content. Guns are for boys and tea-sets are for girls, yes, but what happens when you show a child a fuzzy, pink gun? They look at the cover, and say it's a toy for girls. Plants vs. Zombies is that pink, fuzzy game; its content is a hardcore game, but it looks like a casual game, thanks to its marketing, its bright, 2D graphics and relatively simple grid.