When Magic: The Gathering was released in August of 1993, it was the first of its kind. A game where you collect cards to summon monsters who then fight each other? That's awesome! As I was into many of the fantasy themes in the first Magic set and I frequented gaming stores in 1993 (and I was 14), I gobbled up boosters and starter decks like a Dragon Broodmother. At first, I loved to summon big creatures and stomp my friend's weaker decks, but as I delved into the game and began to appreciate its strategic complexity, I became intrigued by the combinations of certain cards to achieve victory. Even though the game was fairly new, I enjoyed hearing about the really great tournament players who were able to construct the perfect deck and defeat any other guy in the room. I started out a Timmy, but I ended up a Johnny. And I looked up to the Spikes. 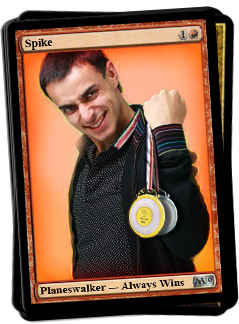 The gameplay of Magic is deceptively simple. You construct a deck of at least forty cards and shuffle them. You and your opponent take turns drawing cards, playing land cards that provide mana of a specific color (plains provide white mana; forests green). You then use that mana by "tapping" the lands (turning the card sideways, a development that Wizards of the Coast patented in 1997) to cast spells and summon creatures. The creatures can be used to attack your opponent, who is summoning his own creatures, in an attempt to reduce his 20 life to zero. Like many great games, success in Magic is determined by a combination of luck and skill. The skill is constructing the right deck and knowing when to use cards, but there is an element of luck in which cards end up on the top of that shuffled deck.

Perhaps the greatest draw of Magic, and the reason that it's still played seventeen years later and has spawned dozens of imitators, is that it appeals to a broad spectrum of psychographic profiles. Different types of gamers get different things out of playing Magic. When he first designed it, math professor Richard Garfield probably wasn't aware how his game would engage so many disparate groups, but now that Magic has been around a while and over 10,000 cards are now in circulation, the research and development team at Wizards found it useful to codify these different profiles, and give them funny names. Doing so helps the team design new cards that might appeal to each type of player and ensures that any one set isn't purely devoted to one kind of play style.

"The idea of a psychographic profile is that it breaks down psychologically the people most likely to buy the product you are trying to sell. Understanding what motivates them, and in turn what motivates them to buy your product, helps significantly with your ability to sell it to them," said Mark Rosewater, the head designer of Magic. He has discussed the three psychographic profiles at the Wizards website for years and his insight on the design process is invaluable to many Magic players. "When I started working in Wizards R&D, I tried applying the profiles to our player base. If we understood what psychologically satisfies them, I felt we could design a game that better addressed their needs. Timmy, Johnny and Spike are the three player psychographics that I assembled."