On the other end of the spectrum was Rick Dyer, Dragon Lair's lead designer, whose perspective was mechanistic rather than artistic. In the archival footage released by Digital Leisure in their Dragon's Lair DVD line, Dyer speaks at length about his role in the creation of Dragon's Lair, revealing a very different idea about where videogames were headed. Dyer was the crunchhead to Bluth's artiste, having spent years tinkering with tech in his garage to produce artifacts somewhere between modern videogames and mechanical calculators. Dyer's first "interactive game" combined a rudimentary computer with a spool of cash register paper, which was covered in text and illustrations at various intervals. As a player input various commands, the machine would spool like a player piano through its automated story. 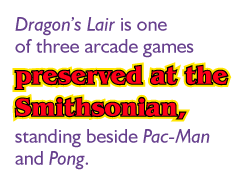 Both Bluth and Dyer were interested in storytelling through games, but for diametrically different reasons. Bluth looked for ways in which games might mirror universal artistic techniques, and ultimately contribute to a continued tradition of film and animation. Dyer, rather, was interested in the specific ways in which story might be mediated through modern technology. But both were convinced that they were on to a winning formula. Dyer, in an interview viewable on the game's DVD, had these words of warning for his competitors: "I think right now the arcade industry is playing catch up to us. We have a sense of direction here. I'm not sure that some of the companies like Atari have that anymore." The message was clear - these men had seen the future, and it was them.

But it wasn't to be. By 1987, the money was gone, and Cinematronics was defunct. A bubble of similarly-themed titles had risen, and then burst just as quickly. Some saw moderate success, such as Cinematronics' follow up title Space Ace, and Taito's Time Gal, but for the most part, the genre had played itself out. The growing disenchantment with this type of game came from a few fronts. There was the fact that the games were hardly "games" at all, requiring minimal and confusing inputs to advance. There was also the infamously punishing difficulty. Dragon's Lair contained several confusing or contradictory challenges, all of which would reward the player with instant death. Many of the feverish early reports had come from press members or arcade patrons who had only seen the game, and had yet to learn what a quarter sucking menace it truly was. Most challenges were to be solved by trial-and-error rather than an internal logic, which meant that you had to keep funneling money into the machine to creak the story along - think "pay-to-play" meets "Pay-Per-View." That Dragon's Lair was one of the first games to require 50 cents to play only compounded these costs - and this was during a time when a quarter got you a bus ticket, two seats at a movie and a hamburg steak, if my grandpappy's stories are to be believed.

Today, Dragon's Lair is one of three arcade games preserved at the Smithsonian, standing beside Pac-Man and Pong. In this setting, it seems easier to gauge the game's impact: not the way of the future, but a moment under glass. The phenomenon of "laserdisc games" has aged poorly in a number of respects, being costly to manufacture, and limited in the play experiences they offered. And anyone who shared Bluth's hope that this genre of game would draw in innovation and artistry could easily be disappointed in how rapidly the "high art" concept of Dragon's Lair became a piecemeal scrabble towards shoddy imitation. While Bluth's desire to see gaming inspire original animation came true to some slim extent - I still can't help smiling when I watch the wacky death animations in the Toei-animated Taito title Time Gal - others ironically took pains to cut out new animation altogether, such as the later title Cliff Hanger, which saved on production costs by cobbling together footage from two pre-existing movies.