And then there is the spotty fate of Dragon's Lair itself. To date, Dragon's Lair has been released 59 separate times across over 30 platforms. The earliest are adaptations in name only, relying on the very sort of blocky pixilated graphics that Bluth despised - and while many later ports are able to capture the original video, they are navigated through a modified set of DVD or Blu-Ray controls that only further reinforce the Dragon's Lair's dodgy status as mongrel movie rather than game proper. 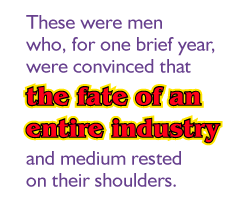 But though it's clear now that the laserdisc was not fated to revolutionize the medium of gaming, there is still some sense that Dragon's Lair pre-empted a lot of the questions that we're still gnawing on today. After all, combining high-end graphics with minimal player input to create the illusion of agency now serves as one of the basic building blocks of some of today's games. Whether you like or loathe what Dragon's Lair envisioned as the future of games may depend, in large part, on your perspective - are games defined by form, or by content? Do you turn to games for stories or beautiful graphics? Or are you content with the bare bones of gaming - the stuff Bluth would contemptuously describe in Digital Leisure's interviews as "little sticks and dots"? What ultimately do we desire from our videogames - control, or the illusion of control? Put simply - how much game do you want in your game?

For my part, I find that for all its failings, I'm not finished with Dragon's Lair just yet - not as a game, but as something else entirely. I recently borrowed a DVD copy that had a special feature to simply watch through all the game footage, strung together from beginning to end. Surprisingly, it kept my interest throughout. It's not a perfect movie - it's repetitive, not much on dialogue, and has a lot of screaming and dying. But then, Avatar seemed to do okay, so there you go.

In this respect at least, Dragon's Lair can be said to succeed as the sum of its parts. And as much as the DVD shows the game's seams, it also evidences the colossal effort that went into the game. Classical animation is a laborious process, but the results simply can't be faked - if anything, Bluth's hammy, limber animation serves to illustrate how much of today's graphics, in contrast, remain firmly planted within the cannier side of the uncanny valley. I think of Bluth's animation team working tirelessly to capture each fanciful way to die, and look back on Dyer's hushed description of the phenomenal power of the laserdisc, during a time when most people thought a laser was something a Bond villain might try aiming at the moon. These were men who, for one brief year, were convinced that the fate of an entire industry and medium rested on their shoulders - a rags-to-riches story, like something from a fairy tale.

But for all the comparisons that Don Bluth made between movies and games, he only seemed to have it half right. In the movies, you can bet that the hero will slay the dragon, save the princess, and win the day. But in games, it doesn't always work out that way. Sometimes, it's "game over," and you're all out of quarters.

Brendan Main hails from the frosty reaches of Canada, where he waits patiently for a laserdisc game made from The Logdriver's Waltz.