Stop me if you've heard this one.

A game is released that's so cutting edge, so revolutionary, that people question whether it should be called a "game" at all, opting instead for the futuristic-sounding "interactive electronic experience," or "participatory video entertainment." A breathless press dubs it light years ahead of the competition, with graphics twenty times better than anything else on the market. Its lead animator explains that it represents a huge leap forward for storytelling, for design, for the fate of the entire medium: "For the first time we've put the hands of the engineers, who have heretofore been the game designers ... now we're taking Hollywood and screenwriters and the people who work with dramatics, and we're putting them hand in hand ... that's why I think that you'll find something that is tremendously more exciting." This is a big claim - but a guy who uses "heretofore" in casual conversation must know what he's talking about, right? Excitement builds to a fever-pitch, with people lining up for hours just to get a chance to glimpse the game in action. 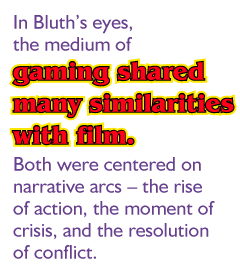 Anyone with an ear tuned to the wonderful world of videogame news may be familiar with this tenor of hyperbole. The "game that's so good it's not even a game anymore but this other word we invented just now." The unique mélange of new technology, cinematic narrative and good old fashioned artistic brilliance, combining to produce a hybrid of videogames and film: The game that you watch. The movie that you play. Hearing these wild claims, you might be reminded of any number of recent titles - Hideo Kojima's Metal Gear Solid 4, Quantic Dream's Heavy Rain, Remedy Entertainment's Alan Wake. If any of these games came to mind, you'd be close ... but you'd be off by about a quarter century.

The year was 1983, and the game that would change everything was Cinematronic's Dragon's Lair. The game was instantly recognizable as different from other arcade titles. Conventional games of the era were sprite-based, representing movement through a series of bitmaps displayed in succession. Dragon's Lair instead relied on laserdisc technology, which allowed it to sidestep the graphical restrictions inherent to sprite-based gaming, resulting in a finished product radically different than its competition. While the game's premise was routine, even rote - enter castle, evade traps, slay dragon, save princess - its graphics were the selling point. In sharp contrast to the bleeps and bloops of yesteryear, Dragon's Lair offered full-fledged animation. And not just in the intro, or in a few select cut scenes - the game itself was comprised of video clips, punctuated at frequent intervals by player input. Do it right, and you are treated to a scene of the protagonist evading danger and proceeding deeper into the castle. Do it wrong, and you witness one of a couple dozen interesting and evocative death scenes. The result was, in the modern parlance of videogaming, one big quick time event.

Such an unusual game sprung from the meeting of two minds - two very separate men, with different ideas about the medium of videogames. Behind the artistic direction of the project was Disney's own Don Bluth, who had done animation work on 101 Dalmatians, Pete's Dragon and The Fox and the Hound, and who had founded his own animation studio and directed The Secret of NIMH. In Bluth's eyes, the medium of gaming shared many similarities with film. Both were centered on narrative arcs - the rise of action, the moment of crisis, and the resolution of conflict. Story, character, and narrative were central to a fully-realized experience of play. As a craftsman, Bluth understood that this would ultimately be a question of craft - that future games would need scriptwriters, composers, and illustrators, and that the next generation of games might serve as a proving ground for artists eager to try new things.