The Super Show! half-hour was divided into bits: a live action portion wherein Mario and Luigi get up to hijinx in their Brooklyn apartment, an animated portion that usually spoofed a movie or a legend using the Mario cast, and an "exciting preview from the next episode of The Legend of Zelda." The show ran Monday through Friday, and on every Friday the animated portion of the show was a Zelda episode. 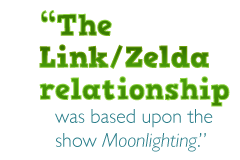 As kids, the live action portions of the Super Mario Bros. Super Show! was a little dull compared to the cartoon, which was full of the Brothers' zany antics and Bowser-bashing. But watching the show as an adult throws it into a new light. The cartoon portions come off as juvenile, whereas the live action portions are worthy of a chuckle or two (the laugh track helpfully reminded us when it was time for merriment). In one instance, Mario and Luigi believe that they've hit the jackpot when they uncover what they think is a genuine version of The Last Supper. A professional assessment informs them that what they have is actually a copy of da Vinci's The Second to Last Supper, which has a value of zero dollars.

Also, Captain Lou Albano reveled in his role as Mario as only Captain Lou could, God rest his leg-dropping soul.

The Legend of Zelda cartoon that was packaged with the Super Show! was an energetic piece of work that is still quoted today, for better or for worse ("Well excuuuuuuse me, Princess!"). The story for the first Zelda game didn't offer much more than the story accompanying Super Mario Bros., but whereas the Super Show! built its world around parody, the writers for the Zelda cartoon chose to build a world of fantasy and adventure around Link, Ganon, Zelda, and the Triforces.

"I'd already gotten tired of heroes that only restored the status quo," says Bob Forward, who wrote for the show. "Villain does something, heroes stop him. So I decided to give each side a Triforce, and have a fair percentage of the shows involving our heroes taking the initiative of trying to get Ganon's Triforce away from him."

The chemistry between Link and Zelda was unusually volatile for a kids' show, which helped it stick in gamers' memories. "The Link/Zelda relationship was based upon the show Moonlighting," recalls Bob Forward. "VP of Creative Affairs Robby London felt that we should use it as a relationship model, and I was fine with that."

The Legend of Zelda cartoon may have even influenced later Zelda games. It's impossible to know for sure, but there are coincidences worth noting: Link had a mare in the cartoon, and he gained Epona in Ocarina of Time. Link also had a fairy friend, Navi, in Ocarina of Time ("Hey! Listen! Hey!"), but he met his first fairy companion in the Zelda cartoon - a story decision Forward remembers well.

"The fairy was a very minor element in the original game," he said. "I decided to make her a character, and make her cute, because, like many males working in the animation business at the time, my first sexual fantasy character had been Tinkerbell. That scene where she stands on the mirror worrying that her butt is too big? Still gives me wood."