The '90s dawned, and Mario's world gained a great deal of color and character through Super Mario Bros. 3. His cartoon adventures took a similar turn, leaving behind parody for some simple frolicking in the Mushroom Kingdom. Each of Mario and Luigi's exploits were set in one of the Kingdom's curious climate zones (Grass Land, Desert Land, Dark Land) except when the two trekked back to "The Real World" to foist lessons about the environment and racism on their young audience. 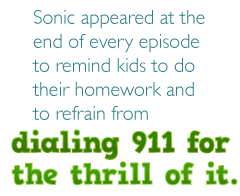 The Adventures of Super Mario Bros. 3 was paired with Captain N: The Game Master. The title of Captain N fell on Kevin Keene, a game-loving valley boy that no twelve-year-old girl could help crushing on. Kevin used his Zapper, Power Pad, and real-world knowledge of his videogame collection to save Videoland from Mother Brain (voiced by Levi "Feed Me, Seymour!" Stubbs) and her evil minions. Kevin traveled through game worlds to foil Mother Brain's plans - and those worlds had some pretty marketing-minded names. Kevin didn't visit Zebes; he visited the world of "Metroid." He didn't fight dragons in Alefgard; he took them down in the world of "Dragon Warrior."

Between the awkward names and the odd character designs (Simon Belmont with fighter pilot goggles? A green Mega Man?), something about Captain N felt counterfeit. It came very close to capturing the hearts and imaginations of young gamers, but could never quite get there. It was as if Nintendo cast its shadow over the show, arms crossed in disapproval.

A parent company's blessing in an animation project can make a difference in quality. In the first half of the '90s, Sega was determined to prove that anything Mario could do, Sonic the Hedgehog could do better. And in the world of animation, Sonic largely came out the victor.

The hedgehog starred in two DIC productions that ran side-by-side beginning in 1993. Each cartoon was put together by a different team of writers and animators, and therefore had very different styles. The Adventures of Sonic the Hedgehog, which ran on weekday afternoons, emphasized Mobius' crazy corkscrew environment and Sonic's gravity-defying antics. Sonic and Robotnik, voiced by Jaleel White and Long John Baldry respectively, performed all kinds of wacky Looney Tunes-style slapstick. Sonic also appeared at the end of every episode to remind kids to do their homework and to refrain from dialing 911 for the thrill of it.

On Saturday mornings, ABC aired the other half of the Sonic animation initiative: Sonic the Hedgehog, often labeled as "SatAM" by its still-functioning fanbase. Written by Ben Hurst, the cartoon presented an interesting situation: An occupied Mobius, ruled with a literal iron fist by Robotnik and his roboticized slaves. Sonic teamed up with several other furry friends to thwart the dictator and return peace and nature back to the grim and grimy Robotropolis.