On the DVD collection, Ben Hurst talks at length about the challenges he faced writing up the cartoon's early episodes. He had very little to go on aside from "Sonic doesn't much like Doctor Robotnik." But he squeezed what he could out of the story bible and decided that you can't go wrong with tropes like rebellion and the classic struggle between good and evil. The result is apparent; there aren't many Saturday morning cartoons that let the bad guy win from the start. 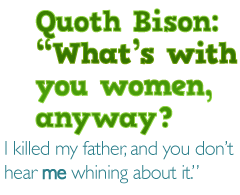 The latter half of the '90s saw a surge in Capcom-flavored programming. Mega Man, Street Fighter, and Dark Stalkers all got their turn at the animator's table, and the results were varied.

The Street Fighter cartoon premiered in 1995. It hobbled onto television with busted kneecaps thanks to the godawful Street Fighter movie, but it took steps to fix the beloved story elements that were chewed up and expelled by the film. Dhalsim turned his back on science and returned to a mystic way of life. Cammy fell under Bison's control and betrayed the Street Fighters at key moments. Ken was a rich boy with daddy issues, and Guile dealt with a failed marriage.

There was even a one-episode crossover with Final Fight (and another with a lesser-known Capcom classic, Magic Sword). The Final Fight crossover was interesting simply because Cody had the intelligence and emotional restraint of a gorilla with one half of its brain blown out. The Street Fighter cartoon also gets mega bonus points for the single greatest villain line in cartoon history. Quoth Bison: "What's with you women, anyway? I killed my father, and you don't hear me whining about it."

Videogame cartoons spiked in the mid-'90s. When Pokemon conquered the Game Boy and English television stations in 1998, American-made videogame cartoons dwindled in favor of imports. But regardless of their country of origin, most videogame cartoons still don't offer riveting stories and memorable adventures. Maybe it's time for game cartoons to mature along with the audience that it enraptured through the '80s.

It would also be beneficial for a game's producer/writer to become more involved in proposed cartoon adaptations. 1995's Earthworm Jim cartoon was a genuinely funny kid's show thanks in no small part to the supervision of Jim's dad, Doug TenNapel. Not every game cartoon proposal needs to be immediately categorized as a Saturday morning distraction. The maturation of specialty channels and broadband Internet access should have diversified game-based animation projects years ago.

Let's give game cartoons another chance to capture our hearts. Prime-time BioShock cartoon, anyone?

Nadia fell into freelance writing in 2002, and she's been helpless to wash off the inky residue since. She writes for 1UP.com, WhatTheyPlay.com, Gamepro Magazine, and other fine publications that are available on the Internet and at your local newsprint merchant. She's About.com's guide to the Nintendo DS at ds.about.com.

Gallery of the Day: 8 Watery Levels To Get Your Mouth Watering DrStrangelove 6 Comments
Comments on