Pity the parents of the '80s and '90s. If they weren't worrying for our safety whenever we scurried off to the smoke-filled holes once called "arcades," they were enduring the electric noise from our endless play sessions at the Atari, NES, Super Nintendo, or Sega Genesis. And if they weren't putting up with that, they were probably looming behind us and mourning our generation as we scooped up videogame cartoons with our Saturday morning cereal. 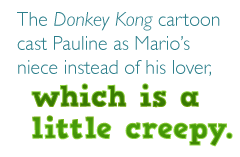 Now we look back on those cartoons, laugh, and say "Oh man, those were pretty bad." But was every single video game cartoon indigestible, or did a few have redeeming qualities? And is there a future for game cartoons outside of the elementary demographic?

The Sins of the Saturday Morning Supercade

The further back that you look, the less game cartoons had to offer. No surprise there: How can you make any kind of a story out of Pac-Man bingeing, Frogger hopping, or Q*bert swearing? Nevertheless, the animators at Ruby-Spears tried.

The Saturday Supercade aired on CBS from 1983 through part of 1985. The show rotated stories featuring characters from the golden age of the arcade and Atari, including Frogger, Q*bert, Pitfall Harry, Dexter from Space Ace, Donkey Kong, and Donkey Kong Junior.

The Supercade wrung stories from its one-dimensional characters by simply taking them out of their element. Frogger helped run a newspaper and was sometimes forced to leap hazards in order to get a story; Mario and Pauline chased after Donkey Kong as he wreaked havoc; Q*bert hung out with his friends and dealt with typical kids' problems, like bullies. Ruby-Spears also saved itself some grief by giving the denizens of Q*Ville arms - even going so far as to return to Coily the Snake what God took from his species when Adam and Eve fell from grace.

The Donkey Kong cartoon cast Pauline as Mario's niece instead of his lover, which is a little creepy. Ruby-Spears probably wanted to eliminate any implication that Mario and Pauline might attempt some premarital groping while on the open road, God forbid, but even the littlest kid at the time could still identify Pauline as Mario's damsel in distress. Moreover, what does it say about Luigi that he seemingly fathered an illegitimate child and dumped her on Mario's doorstep?

The Saturday Supercade offered nothing beyond average cartoon fare. Given the gruel-thin stories of arcade classics, Supercade should just be shrugged off as an animated marketing experiment from the same era that gave us Rubik the Amazing Cube.

Do the Mario (and the Zelda)

The Saturday Supercade was from an era most of us probably don't remember all too well; we were too busy drooling on ourselves and gumming Arrowroot cookies to care about the continuity errors in Frogger. The first videogame cartoon the Internet seems to identify with is the Super Mario Bros. Super Show!, which aired in 1989 and lived in syndication until 1994.

Gallery of the Day: 8 Watery Levels To Get Your Mouth Watering DrStrangelove 6 Comments
Comments on