A curious rumor started to surface in the summer of 2008: PopCap, the game company in Seattle best known for making cutesy casual games like Bejeweled, Peggle and Bookworm Adventures Deluxe, was making a zombie game. At first blush, it sounded like a joke. Sure, Bejeweled and Peggle have created brainless workplace zombies, but actual zombies? No way. 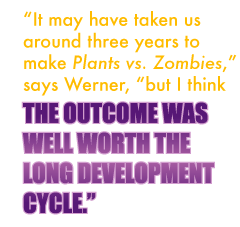 How do you pair the walking undead - bane of gun-wielding hardcore game protagonists - with a casual game? The very notion seems impossible. Zombies are dangerous, mindless enemies to be destroyed at all costs. Their eradication requires tact, aggression and - most importantly - firepower. They are not what one clicks, matches or clears. Zombies are not casual.

And yet, following the rumors came a playable preview of the game itself. Yes, it featured zombies. Yes, you killed them. Yes, it looked casual, at first, but the more one played the early build of Plants vs. Zombies, the closer one came to realizing that it wasn't a casual game at all. Plants vs. Zombies was an insidiously-crafted combination of hardcore gaming elements from some of gaming's most established genres paired with the light, fluffy cartoon graphics one typically expects from a casual title. It was easy to learn, difficult to master, played in short, manageable chunks and - most importantly - was downloadable. Anyone with a computer could play it. And they did. In hordes.

Today, the genius of PopCap's star-crossed union between Zombies and casual games is indisputable. Upon its release for PC and Mac in May of 2009, Plants vs. Zombies became the company's fastest-selling game to date. In February of this year, it was released for Apple's iPhone, immediately becoming the strongest-selling iPhone app launch ever. It remains a best-seller on every platform and has garnered accolades industry-wide, including from this publication. In short, it worked.

The unholy alliance of casual game aesthetics and hardcore gaming tropes has proven so successful, in fact, that speculation over the release date for the sequel, Plants vs. Zombies 2, receives the same treatment that game bloggers and journalists typically reserve for games like Halo and Gears of War. By marrying zombies and plants, it would seem that PopCap has achieved the previously unthinkable: merging casual with hardcore, and the secret sauce owes more than a little to well-conceived and flawlessly executed art.

The Escapist recently spoke with Rich Werner, Lead Artist for Plants vs. Zombies, about the PopCap mojo and why plants with eyes are more interesting.

"When I was brought on to the project, George [Fan, designer of Plants vs. Zombies] had a pretty good handle on how he wanted a lot of the stuff to look. Everything had goofy round eyes and they looked totally funny," says Werner. "When I saw the original placeholder art that he did, I cracked up. I knew right then that I had to try to get on that project."

Forget what you know about how games are made. At PopCap, it works like this: Encourage smart, talented people to develop a passion for what they do; let them bring their ideas to you; push those ideas into the river of design; see what floats; polish the result; make lots of dollars; put dollars back into machine; rinse and repeat. A lot can be said for companies that release new games every year or even sooner. Sometimes, those games are good. And yet, the developers that consistently hit it out of the park, time and again, are the ones that take their time and get it right. First time, every time.

"It may have taken us around three years to make [Plants vs. Zombies]," says Werner, "but I think the outcome was well worth the long development cycle."