Three years for a casual game? That is almost as blasphemous as ... well, a casual zombie game. According to Werner, all of PopCap's games are made this way, by testing and refining a core mechanic until it feels right, thoughtfully considering every detail, heavily polishing and obsessively designing everything. To hear him describe the process, the design teams at PopCap seem more like ancient craftsmen than game developers. 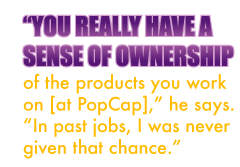 "We didn't take any shortcuts on Plants vs. Zombies," says Werner. "It was less of a question of 'what can we get in by a deadline?' and more of a ' let's just keep polishing this thing and adding what we think is important no matter how long it takes.' And while the upside of that is hard to measure in advance, it's clear that, for us, taking the extra time is virtually always worth it. I think it really paid off with PVZ.

"Any extra time put in was worth it because I knew that the little things would make a big difference and, if it meant a few more hours on an animation, etc., then it would just be that much better."

Judging from the sales figures, players would seem to agree. Yet even more unusual than the startling sales figures are the reviews. Reviewers have called it "really fantastic," "masterful" and "brilliant." For Werner, who's worked as an artist in the game industry for nearly a decade, the opportunity to work on a title as creatively unique as Plants vs. Zombies seemed like a dream come true.

"I wanted [to be] on that game more than anything," he says. "Everything about it seemed awesome. It had zombies for one. (I am a huge zombie fan.) It just seemed so far out there that I had to be part of it. I knew it would be special."

Werner says the experience allowed him to not only stretch his legs in new areas, like animation, but to work as part of a creative team that was given the kind of freedom that most developers can only imagine.

"You really have a sense of ownership of the products you work on [at PopCap]," he says. "In past jobs, I was never given that chance, so it was all bottled up inside me. So when given the chance, I pretty much went all out."

The design of Plants vs. Zombies, and its overall art direction are credited to George Fan, the mastermind developer behind Insaniquarium, who led the team that prototyped the game for PopCap (originally as an Insaniquarium sequel). PopCap shared some of Fan's original concept art with us from when the game was more Plants vs. Aliens than Zombies.

"I wanted to focus on defense elements," Fan told The Escapist in an exclusive 2009 interview, "and I thought, plants actually make really good towers because they're stationary, they don't move, and you can give them a lot of personality."

Speaking to Gamezebo, Fan says the dichotomy between plants and zombies tickles just the rights spot: "The existence of zombies prevents it from being to sugary ... they're goofy, cartoony zombies so it's all good."