Werner claims the original concept art reminded him of classic Disney cartoons, where "everything is alive and sort of dancing all the time." 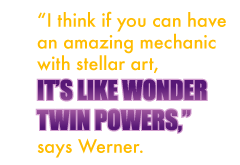 "If they were just motionless, I think that the game would be less appealing. I wanted all the characters to seem like more than just plants. I wanted it to feel like you should care about them. Adding blinking to them I think really sold it."

Blinking, yes, And also crying. In one of the game's earlier iterations, Werner's favorite plant, the Wall-nut, the stalwart defender of his fellow plant brethren, leaked tiny tears from his big, round eyes as he was slowly eaten by zombies. The tears were removed for the final release of the game, but the Wall-nut's cheerful stoicism remains intact.

"He is so simple, but he makes me laugh every time I see him," says Werner. "His big goofy eyes are awesome. And you feel for the guy when he starts getting eaten. He was the first character I animated and made, too, so maybe he has a special spot in my heart."

As for Werner's favorite zombie?

"I think I like the Newspaper one the best. Mostly just because of the fact that he seems to have turned into a Zombie while on the toilet. I love when you rip his paper up he gets aggro. Plus, who doesn't love a pair of sock holders and some heart-print boxers?"

Who indeed? As a player, it's easy to isolate a single element of almost every character in Plants vs. Zombies as the one thing that "sells it." The heart-print boxers. The Wall-nut's eyes. The pat of butter on the Cob Cannon. The sequined socks on the Thriller zombie. The dolphin. It's the presence of each of these minute, yet perfect, details which, in total, make Plants vs. Zombies such a compelling and unique experience. As Susan Arendt puts it in The Escapist's review, "Plants vs. Zombies is fun in concentrated form, an intense dose of giggle-inducing entertainment beamed directly to your brain."

"I think if you can have an amazing mechanic with stellar art, it's like Wonder Twin Powers," says Werner. He credits the game's unique art design to not only Fan's "spot-on" original concepts and the incredible work of the team at PopCap, but also to his own unique and varied influences as an artist.

"There are a ton of things which I gain inspiration from out there," he says, "but I think that what keeps me going is my peers. I have a lot of artist friends that are so amazing to me that I always strive to do what they do. Even at work, the artists at PopCap are so amazing and I know I feed off of that. I'll animate something or create a character and then go check out what other people are working on and my jaw will drop and I'll run back to my desk and try to improve on what I did."

When asked if games are art, Werner basically gives us a "duh":

"I mean, of course, I will say that, being an artist, but I do think it matters. Games really are an art form."

Russ Pitts is the Editor-in-Chief of The Escapist, a survivalist and an avid gardener.