When I think of Japan, I think of giant robots and delicious daifuku buns. I'm bound by my culture to imagine pizza and baseball when I think of the U.S.A; these things divide and identify our cultures. The culture-bound hard-wiring runs deep; it alters who we are, what we like, and what we buy. But we cannot truly grow as humans by ignoring influences from other cultures; after all, pizza and baseball both have roots in the Old World before being co-opted by America. Likewise, the Japanese comic art style was inspired by American artists before finding its own voice and style. Through this confluence of art and ideas, all cultures become enriched. Perhaps we should tear down the barriers which prevent most mature American audiences from appreciating Japanese manga, videogames and art style. 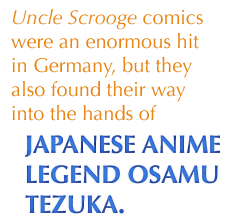 Art is one of the absolutes in defining culture, and it helps other cultures define us. American videogames feature macho, high-tech artwork, with extreme polygons and the newest-latest technology. Our cartoons conversely feature cuteness, bright colors, and fast action. As we Americans grow up, we leave our childhood behind. We realize while re-watching episodes of Thundercats or Teenage Mutant Ninja Turtles was nothing like we remembered it, and we move toward the adult world of No Cartoons. We love the edgy, realistic styles of our adult games as we graduate from our baby world of Saturday mornings and into the big-kid world of consoles and computers.

In the East, and especially Japan, this progression is completely foreign. Since the 1950s, people of all ages regularly read comics (manga) in Japan. There's no finite childhood phase of reading comics, and no social stigma on adults who continue to be entertained by them. Rather than the brutish characters and artistic realism used in Western comics, manga heavily features delicate lines, and super-deformed proportions. How is it that our styles of art differ so greatly? Naturally, there are exceptions, but by exploring the advent of manga and its influences, we see how the gap was formed, and why.

Traditional Japanese manga and animation can trace its beginning back to the miserly Scrooge McDuck in a little bit of "six-degrees of everyone but Kevin Bacon." In 1935, a humble in-betweener (one of the worst jobs in animation) at Disney named Carl Barks began a career that would contribute heavily to comics on a global scale. You've likely never heard of him, though you've no doubt seen his depictions of Donald Duck. Even though he was not the creator of Donald, Barks was well-known as "The Good Duck Artist," and his drawings of Donald became the most popular images of him.

Bark's greatest influence on the world of art came from the artistic style of his Uncle Scrooge comics in the post-WWII era. Uncle Scrooge comics were an enormous hit in Germany, but they also found their way into the hands of Japanese anime legend Osamu Tezuka, the nationally beloved "God of Manga" and the father of Mighty Atom (Astro Boy in English). Tezuka was heavily influenced by Disney, and though his influences include Bambi (which he saw a reported 80 times), Mickey Mouse, and Betty Boop, his strong, bold line-work most resembles Bark's own.

Not content to merely ape the styles of Western artists, Tezuka mimicked Disney's art styles, but created all of his own characters and stories. Frederik L. Schodt, who wrote the English-language adaptation of Astro Boy, said that as the series grew, Tezuka stylized it and it "became more modern and 'cute'" and was intended to be entertaining for elementary-aged boys. The cute style became the classic example of Japanese animation. National traditions remain in place to this day, protecting the cutesy big eyes and small mouths from obsolescence. Even in heady, violent films like Princess Mononoke, cute creatures fill the screen and Tezuka's influence is apparent.