With anime television shows, children's fare like Pokémon and Dragon Ball are more universally popular in the U.S. and Japan. As the age of the audience gets older, cultural preferences show through. In Japan, grown women will admit to being fans of Hello Kitty, while excellent shows like Princess Tutu are not given any attention by audiences in the U.S., because its title refers to symbols that our culture associates with female children. Therefore, no one older than eight would be caught dead watching it for fear of appearing uncool and immature. It's tragic, because Princess Tutu has amazing storytelling, and creates a Gaiman-esque world of folklore and reality. It's sad when our own culture affects us this way, though such barriers exist in Japan as well. The Japanese youth in the same age category can't relate to lone-wolf characters, which would explain why Twilight suffered low box office sales, while Harry Potter and the Half-Blood Prince was the third highest grossing movie in Japan in 2009. 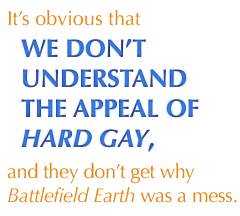 Cultural hard-wiring can explain why Japan is bastardizing everything that we send their way (Japanese Spider-man), and we wonder if they really understand us. Do they get what we're doing? Of course not. On many levels, our artwork is adapted to fit their traditions, and the artistic intentions of our animated works can be compromised or discarded. They dub over our shows, or they simply use a character from our own design and mold it into a robot or magical girl, and dramatize it with Japanese context.

Of course, we can also ask: Do we get them? The answer is no. We don't. We dub over their voices, we edit and alter everything that they send our way (Beast King GoLion begat Voltron), and we know very little about their customs and values. We think of Japan as Otaku do, with our heads filled with samurai, geisha, and lots of videogames. Although it's obvious that we don't understand the appeal of Hard Gay, and they don't get why Battlefield Earth was a mess, there's value added through the crossing of the streams.

Japanese animation and art style may have been inspired by Walt Disney and Carl Barks' depictions of Uncle Scrooge, but it has evolved over the last 60 years. As all culture and art does, manga has absorbed many influences over the years to become something different and wholly Japanese. The culture injection goes both ways, though, with the Japanese art style being seen in videogames and cartoon series meant for children here in the U.S. Perhaps it is time for Americans to withhold the conditioning that forces us to perceive "cute" as "childish" and engage in the crossing of artistic streams that enriches both our cultures.

Letters to the Editor: Back to the Drawing Board Lauren Admire 7 Comments

Editor's Note: Back to the Drawing Board Russ Pitts 8 Comments
Comments on