Why We're Playing Conan and Gandalf

OK, let's say you want to be Conan the Barbarian. Or if you want to be Thundarr the Barbarian, that's cool too. A surprising percentage of Gary Gygax's "Inspirational and Recommended Reading" in the AD&D Dungeon Masters Guide in 1979 are the kind of after-the-bomb post-apocalypse stories familiar from games like Fallout. Whichever barbarian you're playing, the dark ages that follow a world-destroying cataclysm are essential to your backstory. 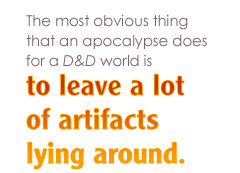 For Conan, the fallen empire is that of Robert E. Howard's other sword and sorcery hero, Kull of Atlantis. Every mythos has its stories of a disastrous fall from grace, whether it's Atlantis, Eden, or Númenor, and Dungeons & Dragons gobbles them all up.

One of the game's axioms is that a thousand-year-sword is automatically better than any made today. This is Atlantis as Golden Age, the long-lost Arcadian perfection in which mortals were as gods. When adventurers descend into the ruins seeking relics from those days, D&D draws on Atlantis the legend of history, evoking the wonder our ancestors felt when they came across monuments that no one alive remembered how to build. RPG designers are just the latest in a long line of gypsies and magicians to make a buck from the allure of mystic secrets from the Pyramids.

If you want to be Gandalf, your backstory comes from the other side of the apocalyptic coin, with the end of the world looming as the War of the Ring converges on Mount Doom. Here, the myth is an eternal cycle of apocalypse followed by rebirth: Frodo's sacrifice ends the Third Age but ushers in a Fourth. In Lord of the Rings, this turn of the wheel brings the world one step closer to a Final Battle like the Norse Ragnarok or the Christian Armageddon. Another of D&D's ur-texts, Stormbringer, envisions an endless and meaningless cycle like that of Buddhism or Jainism which Elric can only hope to transcend.

These myths speak to real-world fears of cataclysm and reassure us that the world will be renewed. Tolkien's experiences in the Great War inform his evocation of looming disaster and a lost pastoral age, just as growing up in an age of bomb shelters and mutually assured destruction shaped the appetites for fantasy among D&D's founders. As Cold War tensions have receded, pre-cataclysm D&D civilizations have become less explicitly technological and similar to our own. Nowadays the apocalypse rarely involves a mushroom cloud, because we have less need to be reassured that some will survive, likely gaining cool mutations or the ability to cast spells in the aftermath.

D&D players just want to loot the ruins, without worrying too much about what the relics they find imply about the world before the Fall or how the rediscovery of this world-shattering power will hasten the next apocalypse. This pragmatic attitude is part of why SF author Jack Vance is D&D's greatest literary inspiration. In Vance's far-future Dying Earth, technology advanced to become indistinguishable from magic so long ago that both are now almost entirely forgotten. In D&D, as in the Dying Earth, apocalypse is too omnipresent for anyone to get excited about the looming extinction of the Sun or the discovery of an ancient artifact. What does it do, and how much can you sell it for?

The most obvious thing that an apocalypse does for a D&D world is to leave a lot of artifacts lying around. Unlike MMOGs, a live and easily bored Dungeon Master wants players to explore subterranean death-traps to get their power-ups, not visit the nearest Magic Mart or grind for components. The justification that the secrets of making these great artifacts of power were lost in the Great Fall has some plausibility and sounds good when intoned over the Conan the Barbarian soundtrack.