Mysterious magic items are just one of the things that we expect out of D&D which can only be made by a fully functioning fantasy civilization. The problem is that such a civilization is anathema to everything that makes gaming fun. We want cities with exotic spices and people from all over the world, but on the road we want to encounter wandering monsters instead of traders, tolls, traffic, and tourists. We want vaults containing a king's ransom, but not the king's taxmen or lawyers. We want elves and dwarves whose lifetimes span millennia, but we don't want them drafting us to fight over things which only they remember, or lecturing us about how every damn thing is a fragile heirloom of their rich artistic traditions.

Why We're Teaming Up to Fight Dracula 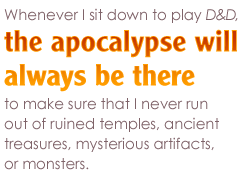 Fortunately, D&D is the apocalypse, bringing down heavy-metal darkness on all the parts of civilization that are too boring to qualify as points of light. It smashes taxmen, tollbooths, tradition, and anything else that might stand in the way of doing whatever the hell we want.

Apocalypse brings anarchy. In his essay "Five Elements of Commercial Appeal in RPG Design," S. John Ross identifies anarchy as an essential precursor to what he calls "tactical infinity." It's what no other game has - the ability for players to do anything that they can think of, bounded only by the imagination - and it's essential to The Escapist publisher, Alexander Macris' "the agency theory of fun."

The strictures of a functional society (like the one we inhabit in real life) inevitably limit our personal agency. When we play D&D, we get to experience a world where apocalypse has shattered those restrictions. Better yet, we get payback. Here's I Hit It With My Axe's Zak Smith on the meaning of undead monsters in D&D:

We are born into structures of law and tradition which were invented by men who were dead long before we were born. All our lives, we struggle against their vast, ubiquitous and posthumous powers.

Dracula is one of those dead men, except being undead means that he's still around sucking the blood of those who are young and free and just want to ride wild horses through the streets, blasting things with bolts of energy from their fingers. Let's get him!

Now that I'm no longer an angst-ridden teen in the nuke-haunted '80s, I don't secretly wish for the apocalypse to come along so that I could loot and kill as I pleased. But I sure am glad to know that, whenever I sit down to play D&D, the apocalypse will always be there to make sure that I never run out of ruined temples, ancient treasures, mysterious artifacts, or monsters emerging from the distant past who need to be put in their place with a stake to the heart.

Tavis Allison co-wrote Goodman Games' Forgotten Heroes: Fang, Fist and Song, one of the first third-party books for Dungeons & Dragons 4th Edition, which used the apocalypse as a metaphor for the change from 3rd Edition.