How do you rationalize a game where "everybody dies?"

"How do you rationalize nuclear war?"

It's a humid mid-spring day and I'm lying on the floor at my parents' house in rural Virginia, about 70 miles outside of Washington, DC. On the outskirts of Hunt Country, rolling, emerald pastures and grandiose Civil War-era mansions separate Capitol Hill from ... here, an area with a rapidly-dissolving middle class and the inspiration for a rather disparaging (and embarrassingly accurate) book titled, "Deer Hunting With Jesus." I make the best of having to be here and luxuriate in the availability of cheap jerky. As I wait for my brother to join the match of DEFCON that I've set up for us, I stare into the game's main menu, and peruse the many detailed lists scrolling up the left-hand side of the screen that evoke just the right flavor of apocalyptica: beta tester credits, strategic world targets and the symptoms and signs of radiation sickness ("hair loss, bloody stool, sloughing of skin ... "). 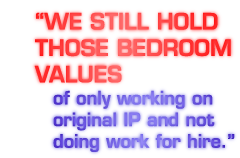 About 3,600 miles away in Cambridge, England, indie darlings Introversion plug away on their next game, Subversion, along with a PSN port of the aforementioned DEFCON. "We've had to do a spot of downsizing recently," notes Introversion managing director Mark Morris. "We finished Darwinia+ and there is a bit of a lull while we do the groundwork for our next projects. At the moment it's just the four original directors and my dad, dutifully sending out the physical units to the customers that want them."

I imagine Mark's dad, Will ("the most under-appreciated member of Introversion"), locked against his will in a bedroom the size of the one I'm in now, though as Mark is quick to note, the studio has smartly ridden themselves of the "bedroom" moniker. "We dropped the 'last of the bedroom programmers' tag a while ago," he says. "When we first entered the industry it was dominated by huge publishers and medium-large-sized developers - there was no concept that a team of four or five people could independently develop and publish a new game. Happily, that situation has changed and we see lots of small teams doing really well. Claiming to be the last in that sort of an environment just stopped making sense. That said, we still hold those bedroom values of only working on original IP and not doing work for hire."

Pemmican in-hand, I ready our game as my brother joins the lobby.

Comics and Cosplay: Show Me the Money: Are Adaptations Helping Comics? MarlaDesat 15 Comments

Gallery of the Day: 8 DC Characters That Deserve Their Own Movie DrStrangelove 7 Comments