For the publisher of a subscription-based or free-to-play game, however, "fun or compulsion" might sound a lot like "win-win." If profit is the only motive, it does not really matter how or why a game gets players to keep playing and spending money. It just matters that they do.

While it would be easy to characterize this as business corrupting game design, it is important to remember the context for many of these developments. In a November 2008 piece for Game Developer, Johnson pointed out that the rise of F2P models owed a great deal to widespread piracy. If DRM was the stick that publishers were using to wring money out of software pirates, the F2P game was an elaborate system of low-cost carrots.

"Designers have to balance making free content fun enough to engage first-time players but not so much fun that they would not yearn for something more, something that could be turned into a transaction sometime in the future," Johnson wrote. "Every design decision must be made with a mind towards how it affects the balance between free and paid content. Thus, the true cost of piracy is that the line between game business and game design has become very blurry. [emphasis in original] As games move from boxed products to ongoing services, business decisions will become increasingly indistinguishable from design decisions." 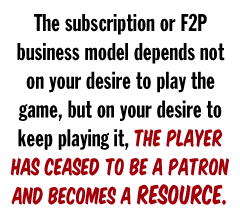 That shift necessarily changes the relationship between the game and its audience. The contract with the typical videogame has been: "You like this game and want to play it, so you will buy it." The subscription or F2P business model depends not on your desire to play the game, but on your desire to keep playing it, and to play more of it. The player has ceased to be a patron and becomes a resource.

This is not an idle fear; it's already happened. In an astonishing piece about ZT Online, a popular Chinese MMO, Southern Weekly revealed how the game uses a number of highly exploitative mechanics to convince players to increase the amount they spend on the game. The entire game is structured like an elaborate trap.

Getting good equipment requires feeding cash into pay-to-open treasure chests, a slot-machine mechanic that never quite pays out. The very best equipment goes to the player who opened the most treasure chests that day. Players race each other to the top of the treasure-chest ladder, desperate to improve their characters. Equipment trading was banned between players, so class-specific equipment could not be swapped. Gear upgrades would frequently, and randomly, destroy all the gear and the upgrade materials. The gameplay of ZT Online forces players and factions into confrontations where better equipment (i.e. higher levels of monetary investment) predetermined the outcome. To make progress in the game, players had no choice but to open their wallets.