"I spend a fair amount of time playing casual games on my iPod Touch," says Steve. "I may not play a game on my PC for a few weeks but then play daily when a new game comes out."

Steve doesn't say how many guns he owns, but he's more candid about why he shoots: for the pure enjoyment of it. As for why he games, he says it's for the intellectual challenge and stimulation. 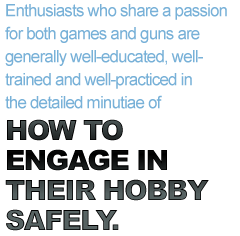 "I enjoy the excitement of a good FPS or the challenge of a strategic game," he says. "I have always been a PC gamer. My very first gaming experience, technically, would be at the video arcade, but my real gaming enlightenment came playing some ASCII NetHack-style adventure game on one of the original IBM PCs."

Steve isn't alone. Of all the gunners and gamers I interviewed for this article, most answered my questions in roughly the same manner. Shooting is fun; gaming is stimulating. Not quite what you'd expect to hear, and certainly not what many anti-gun and gaming advocates would lead you to believe. In fact, most people who neither shoot nor play games assume that people who engage in those activities do so for the opposite reasons, and the mere suggestion that gamers might also own guns brings to mind the horrific images of the shootings at Columbine, perpetrated by two boys who were videogamers and firearm fanatics.

Yet in talking with the gunners and gamers, it becomes clear that these are not members of the lunatic fringe. In fact, those who are most serious about gaming and gunning are probably the least dangerous people you'll ever meet, and less likely to harm themselves or others than "casual" hobbyists - i.e., people looking for a combat rifle on Google so they can "pwn noobs."

Enthusiasts who share a passion for both games and guns are generally well-educated, well-trained and well-practiced in the detailed minutiae of how to engage in their hobby safely. In fact, to borrow a line from a movie, you should be less worried about someone who owns many guns than someone who wants only one.

"It depends on the individual's mental maturity and attitude," says Edwin, a lifelong gamer and gun-owner whose first videogame was Super Mario Bros. on the NES and who learned to shoot in the Boy Scouts. "Do they treat [a gun] like a cool toy? If so, then yes, it's just an accident waiting to happen. But for those like me who took two years to research before purchasing a firearm and then waited until after taking a safety course to even fire it, the potential for an accident is much lower."