Rees, a student who first discovered videogames in high school by playing Counter-Strike with friends and who learned to shoot on his uncle's farm, approaches the hobby of shooting the way some people tackle mathematical puzzles or engineering problems. For him it's an intellectual exercise as well as a visceral thrill. 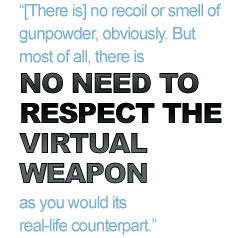 "There is something very primal about mastering explosive force through machinery," he says. "It's like man conquering the natural a little bit every time you shoot. The machinery of guns is interesting; just like building a computer, shooting guns is a study in machinery to me."

Tim, another gunner and gamer, says his reason for owning a gun is a little different. For Tim, gun ownership isn't so much about fun as it is self-preservation. He says he owns only one gun, which he keeps for home defense.

Tim might sound like the kind of guy legislators and anti-gun advocates are concerned about - new to gun ownership, videogamer, potential obsessive - except for one thing: He, too, is well-trained in firearm safety. Although he's new to gun "ownership," he's not new to guns. Tim was in the Air Force.

I asked the gunners and gamers what they thought of military shooters like Call of Duty: Modern Warfare 2 and how accurately they presented firearms. Most agreed that although the games are fun to play, they don't come anywhere near to presenting the actual feel of shooting.

"[There is] no recoil or smell of gunpowder, obviously, but also little of anything else that goes into using a firearm," says Tim. "No loading rounds into clips, no stripping or cleaning the weapon, no hot brass burning your elbow if you're firing from prone.

"Most of all, there is no need to respect the virtual weapon as you would its real-life counterpart. From a technical standpoint there are things to be gleaned I suppose. Some games take into account bullet drop, for example. Management and conservation of ammo may also translate into real-world skills."

Although there have been videogames about cars for about as long as there have been games about guns, there isn't' a single licensing agency in the world that will issue a driver's license to someone who hasn't driven the real thing. To most people, the concept alone is ludicrous.