Consider, then, that the U.S. military has been training soldiers using "simulated" combat scenarios for years. If games are real enough for the military to use as a training tool, then doesn't it make sense that kids playing Modern Warfare would be getting the same effect? Aren't games "murder simulators" as has been popularly assumed? According to Steve, the answer is "no." The simulators used by the military are nothing like what you have in your home. 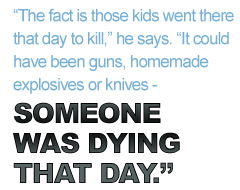 "I have 'played' on a military shooting simulator," says Steve. "The sim I used had a real (but modified) rifle hooked up to a bunch of wires and tubes. The rifle operated just like it would in real life. When I pulled the trigger, gas made the bolt cycle just like a blow-back operated Airsoft gun. To reload, I had to change magazines. I shot at bad guys on a big screen in front of me."

Yet in spite of the military's efforts to capture the physical experience of shooting in simulation, Steve believes there isn't an army in the world that would deploy soldiers who've never fired a real gun.

"I imagine action games like Modern Warfare and America's Army are more useful to teach teamwork and coordination under stress, rather than how to shoot," he says.

Edwin says that he did learn at least a little about shooting from a videogame - specifically, the U.S. Army-designed military shooter America's Army - but it wasn't much more than basic familiarization with a rifle. To learn how to actually shoot, he had to go to the range.

"America's Army taught me how to use ... the standard sights you see on the M16/M4/AR-15 platform firearms. Not that it's helped me in my accuracy. The physical part just can't be replaced by games."

Tim believes that videogames and simulators may be a useful supplement to combat training, but will never be a substitute.

"Hand-eye coordination is a good example," he says. "I think that videogames help to improve or at least maintain that coordination." But he cautions that real military training involves much, much more. "Basic Training offers discipline, the ability to handle real-world stress and the physical conditioning a videogame can't replace. It makes failure unpleasant."

What, then, do the gunners and gamers make of the suggestion that the two hobbies are a toxic mix? That people who both shoot and play games are accidents waiting to happen, like the two shooters at Columbine? I asked them if they believed restrictions on either guns or videogames could have prevented that tragedy and if, as serious gamers and gun-owners, we should be advocating new laws.

"Restrictions are for those who follow the law," says Edwin. "Those who committed the crimes at Columbine are clearly violating the restrictions. ... They used pipe bombs and other IED devices - those are restricted no matter if you are gun owner or gamer."

Rees says it wouldn't have mattered what the two shooters had access to. "The fact is those kids went there that day to kill," he says. "It could have been guns, homemade explosives or knives - someone was dying that day."