Tim believes that the only practical way to have prevented such a tragedy as Columbine would be to completely outlaw all firearms, explosives or anything else that may be used to harm another person, which, when you think about it, isn't very practical at all. He does, however, believe videogames can stimulate behavior. 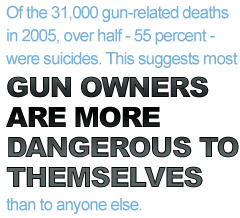 "I do think they can encourage aggressive behavior," he says. "At least in the short term, the 'heat of the moment.' I draw a distinction between aggressive behavior and violent behavior, and I think that in the majority of people the former doesn't automatically lead to the latter. There are always exceptions, though."

Exceptions like the Columbine shooters, perhaps. But as for the effect of banning videogames on violence, Tim is skeptical. "I don't think restrictions on videogame use would have prevented the occurrence at all," he says.

Steve agrees. "They were pure evil," he says. "I am sure that in a world without guns or videogames they would have still committed murder."

Looking at statistics related to firearm-related deaths in the United States paints an even more interesting picture. According to the Centers for Disease Control and Prevention, the number of people killed in the U.S. by firearms in the year 2005 was 31,000, but the number of people killed in traffic accidents was 43,150, making driving in the U.S. almost 40 percent more dangerous than guns - a fact you don't hear a lot of talk about on Capitol Hill.

Looking closer at the numbers, though, leads to an even bigger surprise. Of the 31,000 gun-related deaths in 2005, over half - 55 percent - were suicides. This suggests most gun owners are more dangerous to themselves than to anyone else.

But what about the recent rise in both the production of violent videogames and the skyrocketing sales of guns, including assault rifles like the ACR? While it's true that starting in 2008, in response to fears of new gun legislation, firearms sales increased by an unprecedented 14 percent, the FBI's violent crime statistics show that in the same year, murder rates dropped five percent to the lowest they've been in 43 years. In the same year, videogame sales increased by 19 percent, and one of the top-sellers that year was also one of the most violent, Grand Theft Auto IV.

If you're still worried about game-related gun violence, however, consider this: In most states in the U.S., would-be gun owners must be at least 18 years old, and all retail gun purchases in every state are subject to an FBI background check and registered in a national database. Yet anyone who passes a simple test can drive a car. Perhaps the next person you see playing a racing game is the one you should be really concerned about.

Russ Pitts is a "gunner and gamer" who received his first firearm and his first videogame console at about the same time. The former was a .22 caliber rifle that had belonged to his grandfather. The latter was a Fairchild Channel F. He is the Editor-in-Chief of The Escapist and a member of the NRA.