I used to tell all my friends I was a "honey magnet" in junior high. By doing so, I meant to show them that my ability to seduce women was like a force of nature. I could make this claim based only on my experience of slow dancing with a girl at an afterschool party. I asked her to be my girlfriend the next day and she said, "No." I was promoting an identity for myself to suggest that I had power over something of which I had, thus far, almost no direct experience. I was afraid my friends would discover my romantic incompetence and paralyzing fear of rejection, so I invented a persona in which all of those fears were ameliorated. 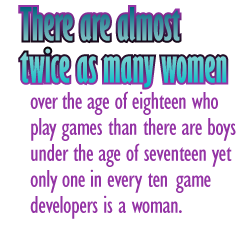 "For many men, masculinity is a hard-won yet precarious and brittle psychological achievement that must be constantly proven and defended," writes Stephen Ducat in The Wimp Factor: Gender Gaps, Holy Wars, and the Politics of Anxious Masculinity. Ducat, a clinical psychologist and professor of Psychology at the New College of California, believes that "this fantasy of being under constant siege by a multitude of external feminizing forces is really an unconscious defense that is employed to keep out of mind something even more disturbing - an identification with women."

This phenomenon has found an accommodating home in the culture of videogames where empowerment fantasy is de rigueur. Consider the nominees for the 2009 Game of the Year at Spike's Video Game Awards: Uncharted 2: Among Thieves, Left 4 Dead 2, Assassin's Creed 2, Call of Duty: Modern Warfare 2, and Batman: Arkham Asylum. Each game is combat-oriented, features male protagonists, and presents a world full of aggressive antagonists in which the player must become a savior. To whom are these experiences most likely to appeal?

According to the ESA, 40% of people playing games are women. There are almost twice as many women over the age of eighteen who play games than there are boys under the age of seventeen. And yet only one in every ten game developers is a woman, while the ranks of videogame journalists skew heavily male, as does the audience that reads their work.

"I can tell you a million personal experiences of me covering this industry as a woman where people are just clearly freaked out by the fact that you're a woman but you're not a booth babe," said Heather Chaplin, journalist and co-author of Smart Bomb: The Quest for Art, Entertainment, and Big Bucks in the Video Game Revolution. "All you have to do is go to a games industry event and it's obvious that there are mostly men in the industry."

In a paper published in the Psychological Review, a group of UCLA researchers found that the "basic neuroendocrine core of stress responses does not seem to vary substantially between human males and females. Both sexes experience a cascade of hormonal responses to threat." However, men are much more likely to respond to stress with a "fight-or-flight" tendency while women are prone to "tend-and-befriend" reactions.