Discussing the graphics, sound, gameplay, and story is the tried and tested formula followed by the traditional game review. Sure, some game journalists can inject a witty turn of phrase and write in a pleasing style but the vast majority of reviews tend to remain shackled to the same old structure of analysis. Yet for those seeking a less conventional perspective, there are alternatives out there that take on games from some rather unusual angles. 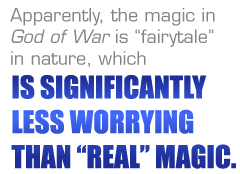 One particular website gave God of War 2 a 3.5/10 rating on one aspect of assessment. The criteria on which the grade was based? Magic. The website in question is CCGR, or Christ Centred Gamer, one of many Christian gaming websites with a particular fixation on the portrayal of all things magical in videogames. Anyone who remembers the campaigns to have Harry Potter banned from libraries will be aware that some Christians have a peculiar fixation on fictional portrayals of sorcery, so it comes as no surprise that the tone is rather anti-magic. Yet whatever your feelings toward the dark arts may be, these sites provide a refreshingly unconventional take on games.

I was pleasantly surprised by how conscientious the reviews were in assessing occult content when I discovered that zombie-killing-fest Resident Evil 5 was deemed a magic-free zone. The reviewer rather astutely points out that despite the game featuring zombie-like creatures, they are in fact infected humans: a product of science rather than the occult. While the tone of the site is one of general disapproval of magic, it is far more analytical than the knee-jerk reactions one might expect.

The higher the score, the more objectionable the magic, but CCGR goes beyond a simple "magic equals bad" analysis and puts a lot of thought into how the magic is portrayed. In God of War 3, you play a Greek pagan god fighting and killing other gods in an orgy of supernatural violence. So why wasn't it given a top-of-the-scale 10 out of 10 for magic-overload? Well, the kind of magic depicted is given great importance and some magic is deemed worse than others. Apparently, the magic in God of War is "fairytale" in nature, which is significantly less worrying than "real" magic. According to the ratings guidelines, Wiccan and Satanic magics are considered real and thus a far more insidious influence than alternatives, like maybe Phoenix Wright's magic magatama or the biotic powers of Mass Effect. There is an undeniable internal logic to this. If you believe magic to be both real and evil, it of course makes sense to worry about how it is depicted in works of fiction.

Another important factor is who exactly is using the magic. If players themselves are throwing fireballs and reading minds, this is a lot worse than simply smiting magic-wielding foes. Of course, a magic-free hero beating up enchanted villains still isn't deemed positive, as minds are still being corrupted by the very notion of magic, yet it's a lot better than little Timmy virtually living la vida magia.