Sometimes the overzealous censors of the BBFC veer into the strange territory of describing what horrific acts of violence are not in the game: "There are blood spurts as people are shot and stabbed, etc. and pools of blood form on the ground. However, there is never any discernible injury detail and it is not possible to inflict post-mortem injuries, although there is considerable ragdolling as dead bodies are shot." (Episodes from Liberty City DLC from Grand Theft Auto IV.) 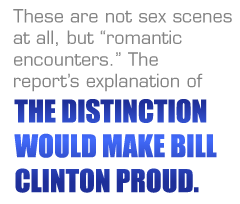 The option of committing sadistic acts of post-mortem violence on corpses is not something that I would usually consider conspicuous by its absence. Yet these kinds of passages in some ways reflect the modern approach to censorship. Despite the popular image of the censor as an out of touch kill-joy, the modern censors look at a work of fiction much more holistically, not just noting the violence but the context in which it takes place. Similarly, if the brutality is taking place in a fantastical or unreal world, this is also addressed in the analysis. Sadistic mutilating of corpses is the example cited in the guidelines as an example of glorifying and dwelling on violence, so no doubt some of the more officious censors go looking for it every time.

While more perfunctory in its analysis of violence, the ESRB devotes more time to sexual content. Mass Effect 2 is well known for its fabled sex scenes and the British BBFC spares a terse three line paragraph making note of their existence, that it "can take place between humans and humanoid aliens of both sexes" and that it is not depicted in detail. The North American censors express far more interest in the subject. Before even getting around to ME2's tame bedroom antics, the report makes note of the "alien pole dancing" with its "choreography highlighted on big-screen monitor. This is followed by extracts of some choice lines of smutty dialogue including "krogan sexual deviants enjoy salarian flexibility."

When they finally get around to the famous sex scenes, it may surprise some to learn that, by ESRB standards, these are not sex scenes at all, but "romantic encounters." The report's explanation of the distinction would make Bill Clinton proud: "Clothed alien/human characters may prop a partner on top of a space console, clear away the clutter from a bed-slab, unzip a future-blouse, or just talk it out. Though an alien/human may gyrate her hips while on top (fleeting - one-to-two seconds), actual sex is never depicted - the camera cuts away to space furniture and ceilings."

Mainstream game reviews can rest easy; these bizarre accounts are no threat to the traditional format. Gameplay, graphics, story, and sound are the sort of things that consumers really want to know about. Still, these weird and quirky reports have an undeniable charm. Strange and ridiculous as some of them may be, they can shed light on cultural differences and present our games in an unfamiliar light. So why not check out the reports on some of your favorite games? Who knows, these unusual perspectives might even inspire you to think about them a little differently.

Fintan Monaghan is a freelance journalist working in Japan.